Familiars and Foes Board Game Kickstarter from Horrible Adorables 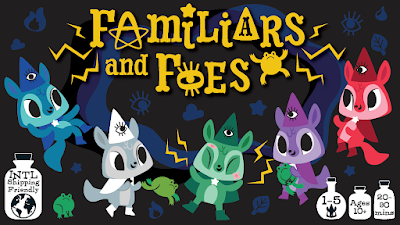 I haven't played a game in years before last Christmas when my niece got one that forced you to find out which person in the group was a werewolf. Everyone involved, besides her, were a little skeptical that it was gonna be corny but we reluctantly agreed to play anyway. It started off slow for a few rounds as we got a basic understanding of the rules, but by the 20th or so time we were full-on investigating people for lycanthropy like we were detectives solving a murder. Accusations were thrown about haphazardly, things from the past were brought up when weighing who had a history of stretching the truth in real life, and I got so caught up deflecting suspicion away from me that I erred by trying to cast doubt on my mother in law, who is as close to sainthood as you can get without the Pope saying so. I'm surprised I haven't been excommunicated for my error and forced to live alone in the woods. 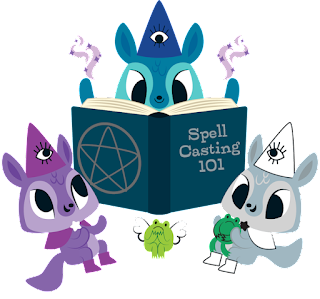 Judging by the look of this new project from Horrible Adorables, the likelihood of this game erupting into a full blown family crisis seems unlikely. Familiar and Foes is a board game that takes the work of the husband and wife art duo into realms beyond your walls or shelves. Here is a rundown of the game from the creators themselves:

Familiars and Foes is a 1 to 5 player cooperative style game. You take the role of a young spell slinging Familiar trying to rescue your witches and wizards from a horde of evil Foes. Your character begins as a base elemental Familiar (Earth, Air, Water, Fire, or Aether) and you must work to fully evolve your Familiar by completing a series of training tasks. The game is played in four waves that progressively increase in difficulty. New sets of Foes are revealed with each wave of battle that must be defeated to save your coven. The game is won when all the Foes have been defeated, all the witches and wizards have been rescued, and at least one Familiar is still standing.

Sounds preeeetty cool, right? But, it's only cool if it becomes a reality, and that's where you come in. The project is live now on Kickstarter and is actually fairly close to being funded. That means with just an extra little push you and your friends could soon have a brand new obsession for game night. Check out this link and see all the cool rewards that are available, which include everything from the game itself, to toys, and their famous felt sculptures. 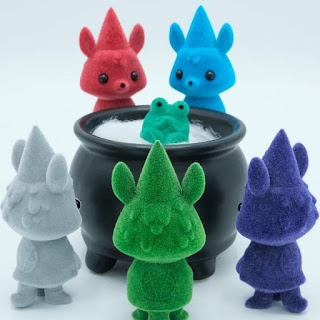