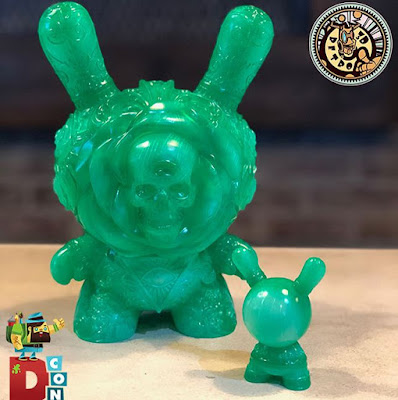 Seeing these exclusives 3DRetro has in store for Designer Con makes me wish I was able to go.  But it's cool, I'll just be at work ignoring my responsibilities while perusing social media to see all the fun you're having.  And if you're not going just know you won't be the only one gently weeping into your cell phone.  Make sure you have a screen protector that's not cracked because tears of envy void the warranty.

First up is this utterly stunning Jade Clairvoyant Dunny from J*Ryu and Kidrobot.  By far my favorite version of this figure, I first spotted this during New York Comic Con and it looks so much like actual jade you expect it to be cold when you touch it.  It's a beautiful piece of plastic that's limited to only 100 pieces and at $100 will be one of the big hits of the show.  Perfect for storing any ancient spirits you may have lying around the house that you just don't know what to do with.  And in case you're wondering it's never to early to shop for your favorite toy blogger for Christmas. 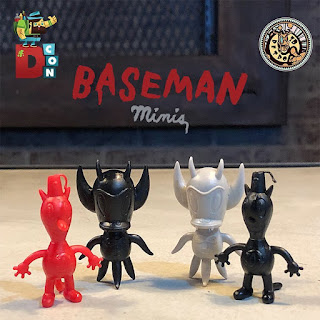 Look at these little jawns from Gary Baseman!  Yeah, I said "jawns" because it is a part of my vernacular and soon midwestern housewives will be saying it the same way Beyonce made them profess that everything "slays", which is dumb by the way.  If anything was ever a jawn it would be these mini figures sold in blind packs of two (one of each figure) for only $4 each.  You can't pick the colors you get, but you can choose to eat one less convention center hot dog to afford them. 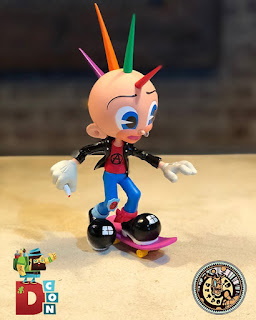 I tried to skateboard when I was a kid but I had this really strong fear of falling and knocking out my teeth that prevented me from reaching my potential.  My fearlessness didn't kick in until my 30's and now I think it's fun to spend a week in the woods looking for bear just for the chance to watch them.  They're really impressive outside of a zoo setting when they're just doing their thing and wondering why some weirdo just traversed a hill to take their picture.    And of course now I can't skateboard because I don't heal as quickly as I used to and I don't want to be the old guy at the mall carrying around a skateboard that he obviously didn't just buy for his kid.

This guy's name is Moe Hawk (I see what you did there) and he was created by KRK Ryden.  Get one for $60 and live vicariously (and safely) through him. 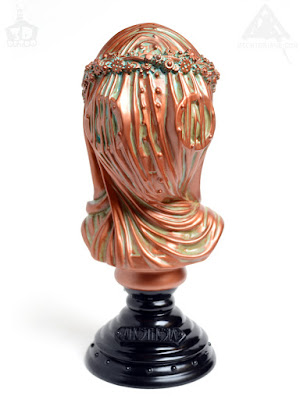 This is Anesthesia, and she is rather haunted looking.  For real, this looks like it was found at an estate sale and is about to start up a five film horror franchise.  Which is why I like it.  Doktor A sculpted this lady and named her after the best sleep you'll get without having St. Peter look you up in his book.  And I loooooooooove a good patina, which this figure has plenty of to keep me happy.  I'm not sure how much it is but Designer Con only comes once a year so don't be a baby about financial stuff and think about how great it's going to look on your mantle.