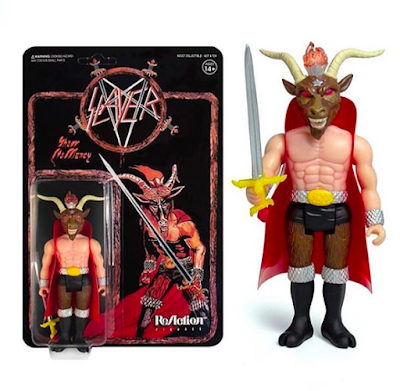 Super7 is killiiiiiiiiiiiing me with their Reaction figure line.  The designer toy world has largely ignored music licensing for some reason, but thankfully someone has picked up the slack and gotten really creative with it.  I've seen Slayer more than I've seen anyone other than Marilyn Manson so you better believe I lost my mind when I saw this figure pop up on Instagram today.  It features the minotaur character from their debut album in classic action figure scale and the cover artwork as the card backing.  This is obviously a case of buy one figure to open and buy one to keep in the package as you'll need one to set up crazy photoshoots with the rest of your collection.  GI Joe has no idea what's coming for them.

These will be up for sale beginning next Wednesday, February 13th, at www.super7.com and their retail locations in San Francisco and San Diego.  The kid I went to middle school with who refused to talk to anyone but literally had every Slayer shirt ever printed is probably really excited right now.