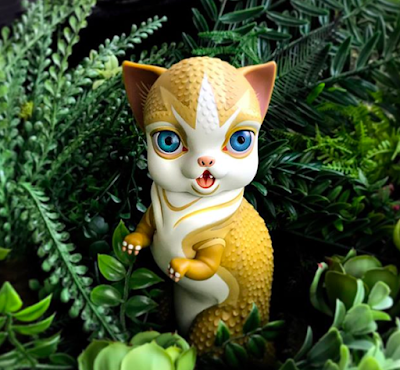 I don't get bent out of shape very often if I happen to miss a toy release.  I tend toward look on the bright side like "I guess it wasn't meant to be" or "hey I can pay the gas bill now".  But let me tell you how gutted I was to miss out on the first Dinokitty release from Mab Graves and 3DRetro.  I almost Kyle'd all the drywall in the house and my wife had to talk me out of burning down the local Wal-Mart mostly because that's where we buy our groceries and not because she has some weird stance against arson.  I really wanted that toy.

If you were as tormented by your lack of Dinokitty as I was then you'll be happy as a clam with what I'm about to tell you.  Or if you read title you probably already know and this part will be completely anticlimactic to you.  I apologize.  For everyone else, this Friday will see the second colorway of the elusive Dinokitty!!!!  Presented in beautiful goldenrod, this reptilian feline is limited to 250 pieces and will go on sale August 16th at noon pacific time.  I'll be at work, but I will coincidentally have to use the bathroom around this time. 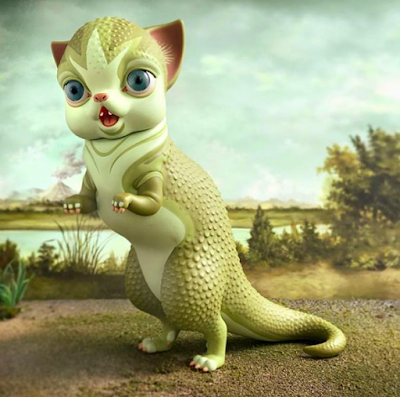 The history of Kitty Rex is not one that you will find in any text book, what with their need to be "factual".  Reality is not something I like to get hung up on, so let me tell you all about them.  The Kitty Rex's reign followed that of the Dinosaurs, though no one knows exactly where they came from.  It's thought that the crater made by the evil death meteor appealed to them for use as a litter box, but the fossil records have not confirmed it.  Our modern cats evolved from them as a means of survival because their tiny feline reptilian arms were unable to open cans of food, nearly leading to their extinction.  Feel free to use any of these completely baseless facts at your next dinner party.

I was kinda depressed when Mab Graves made her mini Dino Kitties and I missed out on them.  I needed them in my life more than I realized and when it didn't happen a great cloud of despair fell upon me.  But fear not, for my melancholy lifted the moment I saw this.  3DRetro has put the fabled Kitty Rex into full vinyl production mode and you can get yours first when they host a release party this Saturday.  Mab Graves will be there to sign your figures and be all David Attenborough with any questions you may have regarding the species.  This version is limited to 200 pieces, will retail for $80, and can first be had during the release party in Southern California.  Any leftovers will then make their way online for those unable to attend.  I haven't done this in a while, but I feel secure in awarding this figure the highest compliment I can offer: 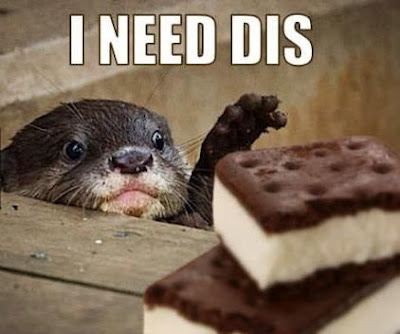