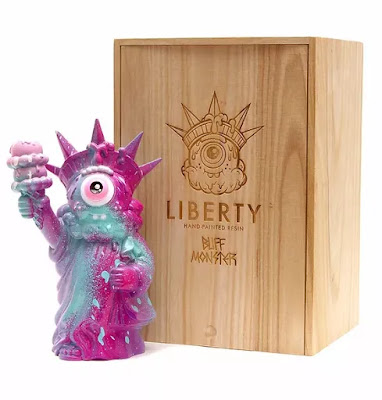 Over the last four years, the standard icons of American life evoked anxiety rather than pride for me.  Add corona virus on top of the political turmoil and the term"dumpster fire" barely covered it. Things were pretty bleak, but as of this Wednesday I once again feel like there is hope in the world.  That science, and reason, and basic human decency have a chance to thrive.  And I am more than happy to help support an America-themed release that is finally something positive after such a long time where it would have been impossible to create such a work. 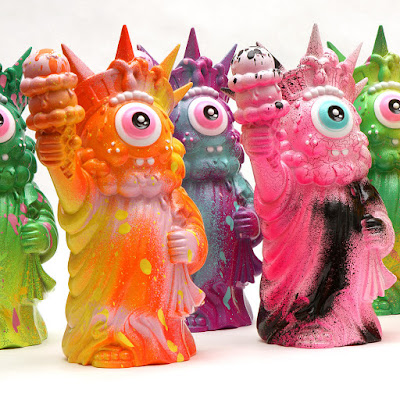 Buff Monster has gone full patriotic with this Liberty resin figure.  And he's gone big, because this beacon of freedom stands at nearly a foot tall.  Each one is made of rotocasted resin, is hand painted, and comes in a pretty sweet wooden box befitting its status.  This edition is limited to 25 unique pieces and will be available at 11am on Friday, January 22nd from www.staymelty.com. 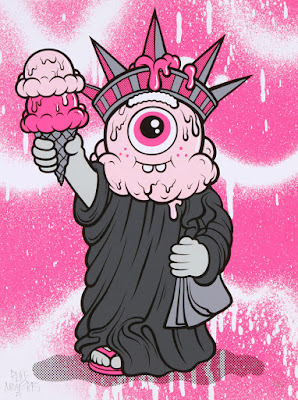 There will also be a limited edition screen print for those of you that still have space on your walls.  I don't know what that's like and have begun rotating our pieces like a museum.  I should really do a themed show one day, just for my wife and the cats.  But back to this print, which is is limited to only 100 copies in this 18" x 24" signed and numbered edition.  It will be available at the same time as the figures on www.staymelty.com. 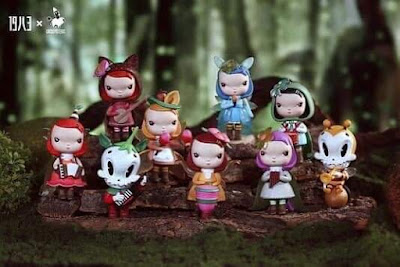 Oh man, we made is out of 2020 and we are neck deep in the promising waters of 2021.  So far there isn't a glaring difference, but I can feel good things are gonna happen.  I even heard "Don't Stop Believing" on the way to the grocery store today and I'm so desperate for a good omen I'm taking that as one.

What better way to put all that yuck behind us than with the power of cute little toys!  Brandt Peters and Kathie Olivas have teamed up with 1983 to release this ultra adorable Cherry Moon Garden blind box series.  And since they're good people, if you buy a full case of figures you are guaranteed to get the entire set.  That's the kind of energy we need in these early days of 2021!!  Not only that, but if you buy a case you also get a signed "Trumpet Tea" mini print.  That's an entire set of figures and a signed print for only $125!!!!   This just took a turn into infomercial territory. 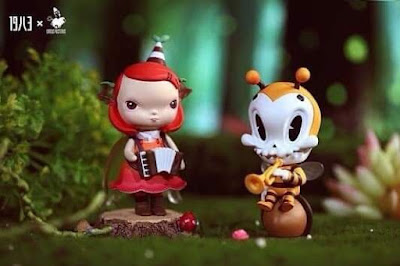 Of course if you're one of those people that like pain there are also individual blind boxes available for $13 each.  I don't know who hurt you, but trust me and buy the case.  It will make you happy.  Get em now at www.circusposterus.com. 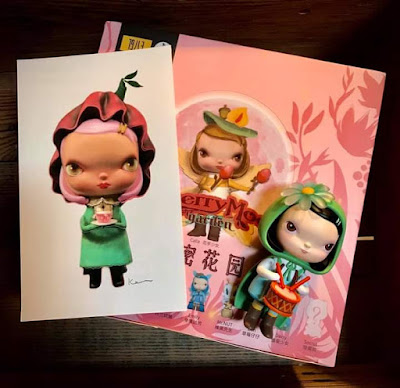 The Sad and Horrible Show at Rotofugi 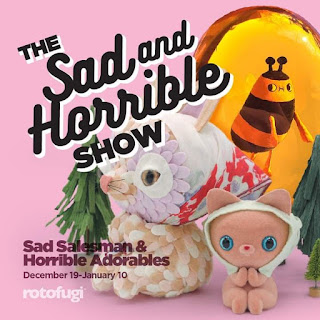 Damn, even for 2020 the name of this show is kinda rough.  That is until you realise it's a combination of Sad Salesman and Horrible Adorables, who are sending this year back to the hell it belongs on a wave of cuteness.  Opening this Saturday (December 19th) at Rotofugi in Chicago, there will be plenty of felt and resin abound for you to cash and carry some great art Toys for yourself or as gifts.  There is no opening reception because of Covid, so if there's something you want and you don't live in Chicago I suggest visiting previews.rotofugi.com to get a heads up on what will be available.  The piece de resistance might just be this super sick tag team figure that is completely drool worthy: 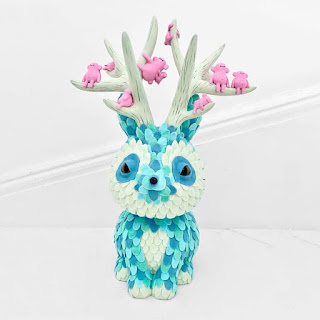 The other day I was at work and wearing my mask like the good citizen I am and I was concentrating on repairing something and a little drool made its escape. Had my tongue sticking out and everything like I used to as a kid when I colored, so thankfully the mask spared me the embarrassment of someone seeing that. 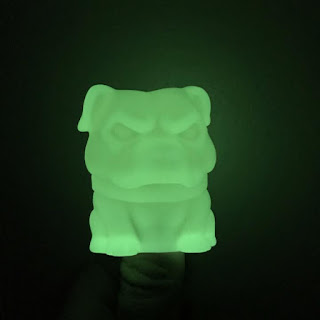 Nothing makes a bad day at work better than when a customer brings their dog in.  An unexplained fire in the building is cool too, but dogs require way less interaction with the police.  I work with a guy that is vehemently against anyone bringing anything other than a service animal in because he hates fun and something about allergies, blah, blah, blah.  The day I put his inability to breathe over my personal happiness will be a sad day indeed, so if you leave your puppy in the car you better be ready to march back out there to get it.

Tenacious Toys has arguably the most famous mascot of any designer toy store and now he's available in little vinyl nuggets that are super affordable and are perfect for filling in those pesky empty spaces in your collection.  This version is glow in the dark and you can rest assure it will be followed up by many different color combos.  What's also very cool about these 2.25 inch figured is that they were made in America by Mile High Sofubi, who as far as I know are the only ones in this country doing that type of work.

These are available now for $15 only from www.tenacioustoys.com. 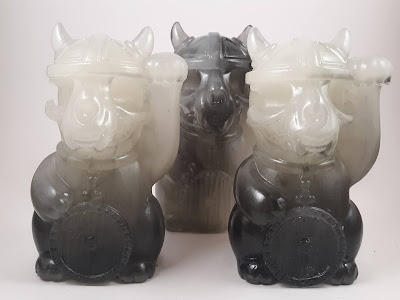 After the sun and moon have been swallowed by the great wolf, and the fires of Surtur have been extinguished, we will be left with only the ashes.

Ooooooooh, I gave myself the chills!!!!  We all know 2020 has sucked in ways we never dreamed possible, but imagine if you knew that not only everything was going to hit the fan, but that you weren't going to survive it.  That was the burden carried by Odin, who went about his business knowing the precise time and manner of his demise.  That would suck a bit, but on the bright side you could completely ignore your credit card bills.

This latest edition of Nordic Lucky Cats is known as the Ashes of Ragnarok and they stand 4 inches tall, are limited to only 10 signed and numbered pieces, and was cast in resin by Dubose Art.  Each comes packaged in a hand stamped muslin bag and is an exclusive release for Galerie F.  They'll be available this Friday, December 11th, at noon central time only from https://galeriefchicago.com. 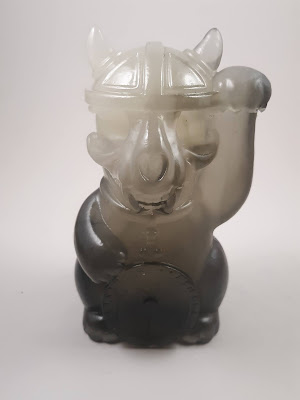 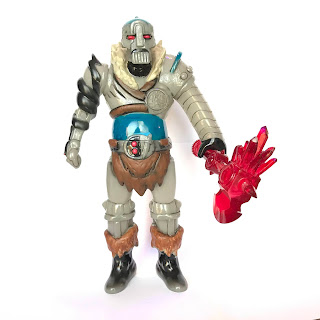 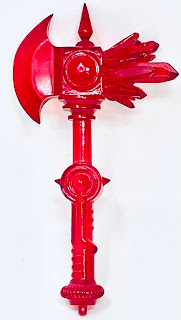 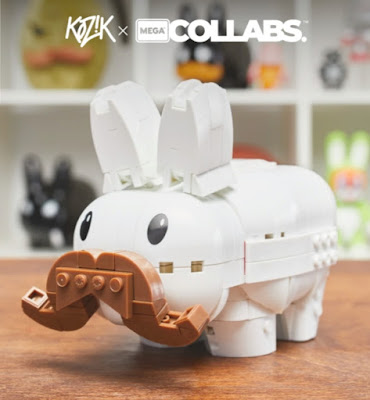 My cat Wednesday has decided in the past two weeks that she would start sitting in my lap.  I was completely charmed, as I have been her caretaker for eleven years and she has never done this.  Then I remembered reading about a cat in a nursing home that used to go around sitting on all the people right before they died.  The cat was completely accurate in predicting who was next to cross over; either as some grand gesture of comfort at that person's time of need or as a way to exploit his psychic abilities to win cash from the staff.  So of course now I'm worried that my demise is imminent because this is 2020 and that is in no way the most irrational thought I've had this year.  I will not be sharing with you what currently holds that number one position.

While I sit here and wait to become a corpse I could pass my time putting together one of these new Mega Construx Labbits.  Frank Kozik's creation has had a lot of different iterations over the years, but never one that required so much involvement from collectors.  Now you can be a small part of the history of the Labbit by building your own, which I'm sure will turn out way differently than anything you've ever attempted to build from IKEA.  The joy I felt when I finally broke apart our entertainment center and threw it in a dumpster should be bottled and sold on every corner in America.

This construction set was designed and produced by the toy geniuses from Mattel Creations and will be available beginning today (Friday, November 13th) at noon eastern time only at https://creations.mattel.com/. 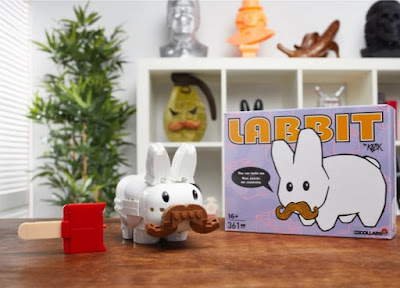