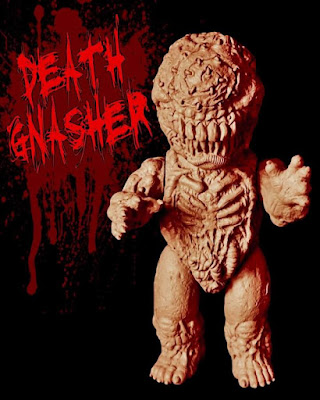 I'm not sure if all couples do this, but I like to play a game with my wife I call "Would You Still Love Me If..." where I come up with the most outlandish things that could happen to me and then ask if she could live with it. It's nothing bad like voting republican, or listening to an entire U2 album, just harmless stuff like if for some crazy reason I woke up and had a golden retriever as an arm. You know, the basic things you worry about. My favorite though is what if I all of a sudden had no lips. Just a big, toothy forever grin that I can't explain. Then I pull my lips back as far as I can and try to get her to kiss me so she can work through any anxiety it may give her, which is usually the point she stops speaking to me. Not really sure why I'm the bad guy, but that's how it goes.

Miscreation Toys has a brand new figure called Death Gnasher, who just so happens to be faced with the very lack of lips scenario I just described. Admittedly he has a few other issues that may prevent him from a happy marriage, like the exposed organs thing.  This ten inch tall horror show is going to be available begining this Saturday, January 29 at 3pm est and will come in two different versions.  There will be an unpainted flesh colored vinyl (limited to 25 pieces) for $155, and a Miscreated painted version (limited to 15 pieces) for $249.  They can be purchased by visiting https://www.miscreationtoys.net/. 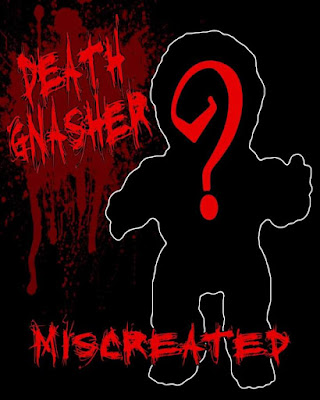 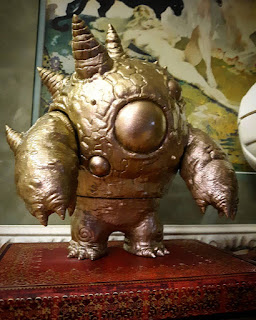 Oh, it has been a minute since I've posted and even longer since I did one of my regionally famous toy reviews.  There's no better way I can think of to kick of 2022 then by telling you all about the brand new Shin Eyezon from Max Toy Co.

What exactly is Eyezon?  Is he a giant, mutated potato, not content to merely fade into oblivion beneath the cupboard of life?  Is he the product of our hubris in trying to push the limits of science beyond their ethical limits?  While that answer alludes me, what I can tell you is that his latest incarnation is by far my favorite ever. 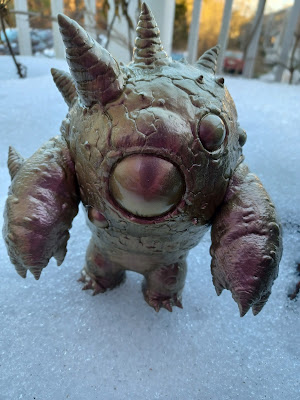 I have a long history with this figure, we'll not this particular one, but one of his much smaller versions, as it was the first ever official Japanese sofubi figure I ever bought.  It was from a small basement shop in Baltimore and he had an entire box full of Max Toy figures still bagged with their header cards.  I ended up with quite a few of them, but the first one I fell absolutely in love with was this yellow tuber that would be an optometrist's nightmare.

Fast forward to this past year when a box shows up at my door containing this beauty: 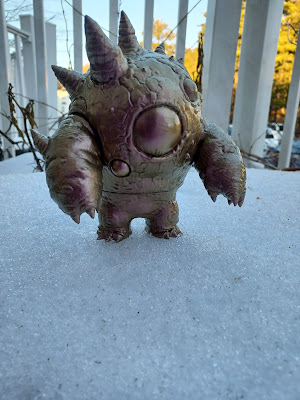 Designed by artist Sophie Campbell, this newest mutation is the direct cousin of Shin Godzilla; a gnarlier, more horror-based version of everyone's favorite kaiju.  Shin Eyezon follows suit with an insane amount of detail courtesy of sculptor Beth Graves, who has packed in enough nuance to this figure that it looks like it may keep evolving on your shelf.  This is certainly not an adorable, misunderstood monster whose mere size causes his intentions to be cloudy.  No, this one is going to destroy everything and everyone in its path because all it knows is evil. 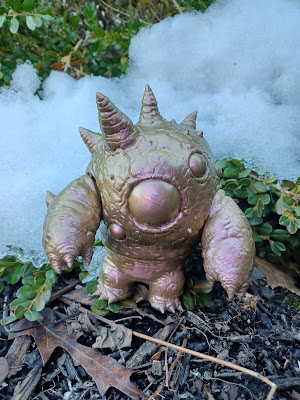 You might be looking at the pictures I've taken and been thoroughly impressed by the composition, or my eye for the perfect artistic shot, but you may also be asking yourself just what color this figure happens to be.  That's an interesting question because this particular version is cast with a crazy technique that makes the vinyl change color.  There isn't any paint on it at all, it's all the plastic itself.  Depending on how you look at it you'll notice it shift between metallica copper and purple, which could keep you busy for quite awhile if you're in one of those states where certain recreational plants were just made legal. Or so I hear (my mom might read this).

Surprisingly there are still a couple of these available at https://www.maxtoyco.com/ , which blows my mind because this is definitely one of my toy highlights of 2021.