As toy collectors, we all have stories to tell.  Some are weird, some are funny, some make you wonder what the hell is wrong with you.  These are our Adventures in Plastic, and this is where we will share them with you. 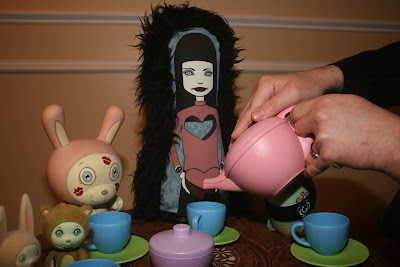 The most important thing to have as a collector, besides tons of cash and lots of patience, is a friend with the same interest as you. Nothing enhances the moment you score an amazing toy than knowing someone who would be tormented by your find. There are entire online forums dedicated to people showing off their collections; the problem with those is that you don’t get to wallow in the envy that is plastered on each person’s face as they drool over your thirteen Ikea Detolfs worth of Kaws. Of course, it does help if they are into the same artists or style of figure as you; otherwise your bragging will never reach its full potential.

When I met Erica we discovered that we both shared a healthy obsession with the work of Tara McPherson. She had managed to buy a few of her toys and a print while all I had acquired was a case full of jealousy. My competitive nature suddenly kicked in like a screaming Valkyre descending from Asgard. Armed with a credit card and a computer I hunted down the items she had and the few she wasn’t able to get. The next time I saw her we didn’t even get into small talk before I brought up my recent acquisitions. The smile on her face grew bigger with each toy I mentioned; a smile that I mistook for happiness at my good fortune and keen internet hunting skills, when in reality it was driven by something far more sinister. “I went to New York last weekend and met her at a book signing.” This was a complete disaster. How on Earth could I measure up against such a pilgrimage to see the actual art goddess herself? There had to be something out there we both coveted more than anything…

That very thing was handed to me by Fate itself. McPherson has released a full size Circus Punk that was one out of only a hundred and hand signed on the bottom. This was like finding the Holy Grail and being able to use it to catch dust on your entertainment center. This was big and I needed a way to gloat that was unprecedented in our collecting relationship. I needed to throw a tea party.

I gathered everything necessary to capture this stunning portrait: clothing to fit the occasion, a small table, a few doilies, and my wife’s tea set from when she was a child. My new Circus Punk took a seat of honor and was surrounded by various other characters. Now all that was left was to take the picture.
Sitting on the floor in a suit and making small talk over tea with one’s collectibles can bring many thoughts to the person documenting the event on film. The first thought could involve the word “genius,” bringing forth the maniacal laughter of an arch villain; the other could include the word “sociopath” and leave them coming to grips with the apparent limits of your own sanity. This is why the tripod was invented; it doesn’t judge.

The campaign of revealing the image to her had to be extravagant and hit her from every side to maximize its impact; the true definition of “shock and awe.” I sent it to her cell phone, emailed it to all of her accounts, and put an 8x10 glossy in the mail to her home address.

It turns out the second most important thing to have as a collector are TWO friends that share your interest in case the first one doesn’t appreciate your sense of humor. 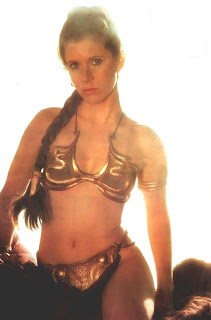 "The Day I Met a Princess"

As many men my age, I can trace back the realization of my heterosexuality to one very specific moment in time:  the disrobing of Princess Leia in Return of the Jedi.  Not that Miss Carrie Fisher went unnoticed by my young eyes in the first two incarnations of Star Wars, it was just the impeccable timing of biology meeting the gleam of her gold bikini that made this moment especially memorable.

Instantly she became my first boyhood crush (a list that would grow throughout the years with the likes of Daisy Duke, Alyssa Milano, and Scully from the X-Files).  I was prepared to kick Harrison Ford’s ass if that was what it took to win the affectionate hand of my princess.  But alas, our age differences and the fact that she was world famous made it impossible to ever connect...until now.

Carrie Fisher recently began a run on Broadway staring in a one woman show based on her hit book “Wishful Drinking”.  Although I am now already married to the woman of my dreams (who oddly enough was never in a movie or television series) I still felt that this was my opportunity to bask in the radiant glow of my childhood fantasy.

Somehow I managed to convince my wife that attending this show would be the perfect way to celebrate our first wedding anniversary.  This is akin to a fan boy menage a trois; sitting next to my significant other while starring at the first woman to give me tingles in my Levi’s.  If there had been a comic convention in town, I’m sure they would have been compelled to bestow upon me some sort of ‘Lifetime Achievement’ award.

We arrived at the theatre according to stalker time (two or more hours early) and proceeded to park ourselves near the back entrance, hoping to meet Ms. Fisher and sign the book that we brought with us.  An hour and forty five minutes later after seeing her hurriedly rushed into another door that was nowhere close to where we had camped out we could fell nothing but dumb.  There was no choice but to tuck our tails firmly between our legs and go warm the seats we had payed so much money for.

The show was as amazing as I had expected it to be.  Borrowing heavily from her book of the same name, she regaled the audience with every sordid detail that she could fit in to two hours.  From Star Wars, to sex, to the complicated Hollywood family tree that she blossomed from, nothing was held as sacred.  It was the equivalent of watching a tabloid magazine perform.

After the show we decided to try our luck again and made a hasty retreat to the rear of the theatre (albeit to the correct door this time).  I had lugged a poster from the original film around the city that day that had been signed by other cast members, hoping for Carrie Fisher to scrawl her name on it somewhere.  This thing survived multiple subway rides, an encounter with a defecating homeless man, and the massive crowds that populate the streets of New York on any given day.  It could not, however, outwit the mulleted and mustached fury that was Ms. Fisher’s handler.

My wife and I positioned ourselves against a barrier that had been erected next to the back door that was occupied by two security guards that were more interested in the updates on the Yankees game they were receiving on their cell phones than the people that were hanging around.  During what must have obviously been a commercial break in the action, they informed us that the star of the show would indeed be coming out to meet us but would only sign ticket stubs or programs from her show.  Waves of devastation attacked me first, as my dream about getting the entire living members of the film to sign this poster quickly deflated.  Then I was hit with indifference as I ignored what they had said and held my prize just out of their sight, hoping that if it made a stealth appearance Ms. Fisher would obviously not refuse to sign it.  But just in case I had my playbill in hand, having decided not to tempt the fates but so much.

Just as she was exiting the doorway a white Hyundai pulled up and out stepped the last member of the Billy Ray Cyrus fan club.  He was a flurry of trucker hat and Budweiser shirt as he made a bee line to where I was standing and said “You have to put that away”, gesturing towards my poster.  The look in his eyes was mixed with so much false authority and irritation I thought the Nascar season had been abruptly canceled.  When I did not move as quickly as his achey breaky heart desired, he attempted to grab it from me.  I pulled it back and we stared each other down, each of us waiting for the other further the situation.  In the end he backed away and my play was graced with the signature I prized.  I was prepared to kick Han Solo’s ass to win her heart, but I ended up almost coming to blows with someone whose transport was in even crappier shape than the Millennium Falcon.