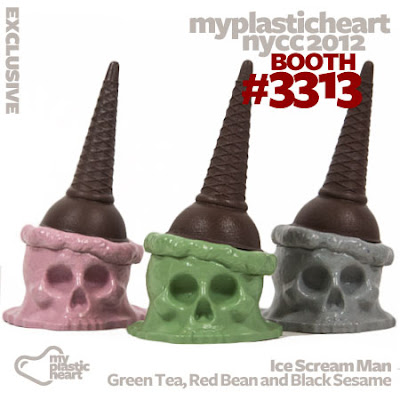 myplasticheart doesn't play around when it comes to exclusives for New York Comic Con.  Every year they have a ton of cool things that would look cool chillin on your entertainment center and now they're giving us a peak at this years must haves.

First up, some wacky flavored Mini Ice Scream Men from Brutherford Industries.  My wife spent 10 years of her life living in Taiwan, so I've heard many stories about her interesting culinary adventures, but none of them surprise me more than the one's about snack foods.  Squid chips?  Wasabi peas?  I definitely didn't have access to that stuff growing up in Virginia, so it never fails to fascinate me.  Now many of us may have never tried green tea, red bean, or black sesame ice cream before, but we can now bring some home and not worry about it going bad before we get the courage to taste is.  You can buy all 3 for only $52, or get one for $20.  Only 50 of each were made and Mr. Brutherford himself will sign his name on them for you Friday at noon. 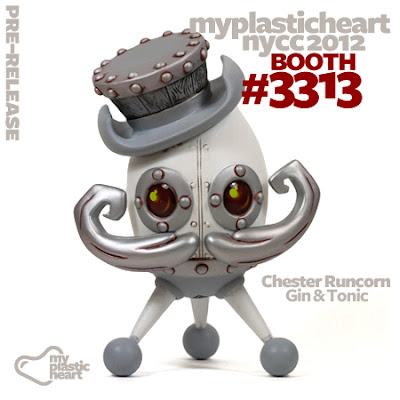 If you're lactose intolerant maybe this guy is more your speed.  It's the Gin and Tonic edition of Doktor A's Chester Runcorn.  This steampunk gent from Kuso Vinyl is a pre release and will cost $64.99.  The good Doc will be signing his wares on Saturday at 4pm. 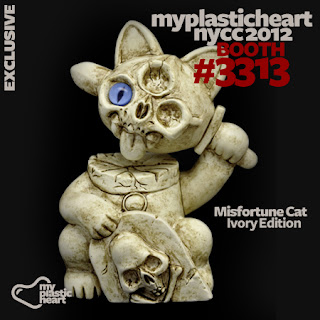 I think this is my favorite of the bunch so far.  This is Chris Ryniak's Ivory Edition Misfortune Cat.  What made kitty sad enough to do something so drastic?  Probably you, but you'll have to work that out in therapy I suppose.  I think I'm gonna get this as my tombstone when I pass on to the great beyond.  Seriously, it would be the coolest thing in the cemetery.  Only 100 of these guys were made and they will set you back $55.  Mr. Ryniak will also be at the con on Friday at 4pm so I can discuss plans for my memorial with him.  I wonder how much a 4 foot tall one in stone would cost?