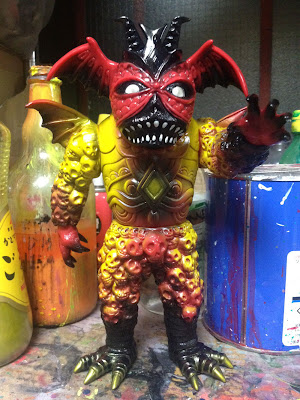 What's not to like about this guy?  Anyone who knows me knows I've been coveting one of these for awhile now and maybe this is my chance to strike.  You can't own a toy like this if you're a sissy, cause it will rip out your soul and make sandwiches from your leftover flesh husk.  Good sandwiches too, not that crap you get pre packaged at the gas station that will turn your intestines into low income housing for parasites.  No, we're talking primo deli meats with all the fixins.  And he'll do it all while listening to lo-fi Norwegian black metal cassettes from the early 90's.

This is Ultrus Bog and he has sprung from the twisted mind that sloshes around in the skull of one named Skinner.  It might be my favorite toy ever that I don't own.  You can get one of your own and make me jealous on October 1st from Lullubell Toy Bodega at 1pm Pacific time.
Posted by Chris at 8:29 AM