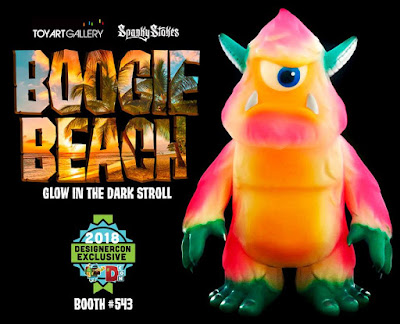 Well look at what we have here!  It's been a long time since we've seen Spanky Stokes Stroll mascot in vinyl form, and it was starting to seem like I had maybe dreamt the previous ones.  You ever have those dreams where you're arguing with someone and then you wake up and are legit pissed at them?  My wife once dreamt that I let a tiger eat her and she didn't speak to me the entire next day.   For one, you don't "let" a tiger do anything.  Have you ever tried reasoning with a house cat?  Now imagine it weighs 400 lbs and could devour you.  And secondly...there's no secondly because seriously you cannot stop a cat from doing what it wants.  So there.

Toy Art Gallery has prepared not one but two new versions of this figure for release at DesignerCon next week.  There's the tropical fruit juiciness of the glow in the dark Boogie Beach version, or for those of you that don't like flavor on your chicken, a plain glow in the dark edition. 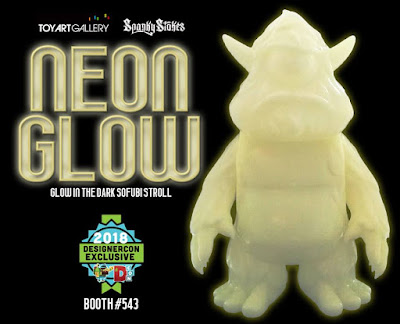 Either way, you can't go wrong with the world famous mascot of the designer toy blog that inspired countless others.  These will be available at the convention from booth # 543.