The Rebel Saint from Rebels and Thinkers x Flab Slab 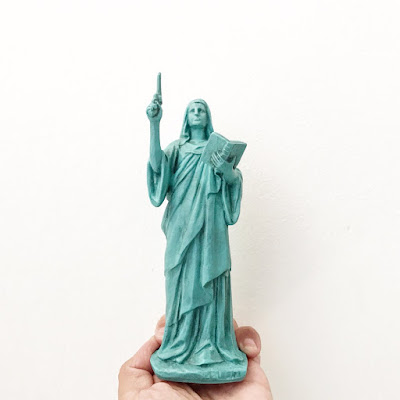 It's only been a few days since I heard of the movie Faeryville, and while the premise of bullied kids rising up to attack their oppressors sounds like a good time to me, I can't believe it's from Singapore.  Being from America I know Singapore for two reasons:  the futuristic architecture and when they caned the hell out of that tourist kid for vandalism in the 90's.  People were really split (kind of like the skin on his backside) about whether the punishment was too harsh but I was all for it.  You don't go to someone else's country and try to play art school Christopher Columbus; if you want to express yourself artistically you deface stuff where you live.  There's plenty of Applebee's that are in desperate need of some forced redecoration.

The patron saint of the above mentioned film has a gun in one hand and a book in the other, which is how I usually spend my lunch breaks at work.  The book was not enough to let people know I didn't want to be bothered, so if they get shot they get shot, I don't know what else to do.  This resin reproduction was created by Rebels and Thinkers and Flab Slab and is the perfect icon for the downtrodden, a symbol of freedom for those who feel trapped by the actions of others.  Standing 6.75 inches tall and retailing for $90 each, if I were the Statue of Liberty I would try really hard at my job, cause a suitable replacement has been found.