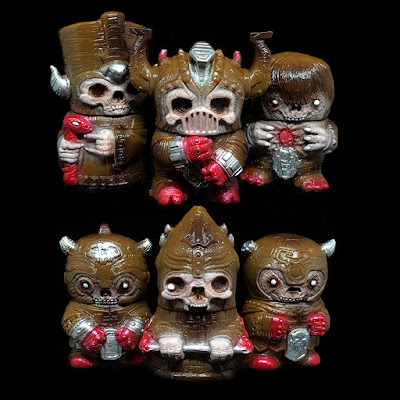 I've been to a lot of places, but I've never managed to find myself in the Nether Realm.  Last spring I found myself in Lurray, Virginia, home of the world famous Lurray Caverns and the almost as famous Cooter's Dukes of Hazard Museum. Yeah, I went to both.  I also ate at a McDonald's there that had televisions in the dining area, one of which was playing a Civil War documentary while the other featured a fire and brimstone televangelist that wouldn't let me eat my chicken nuggets in peace.  I'm originally from the South, so things like this are not nearly as frightening to me as they are my wife, but I have lived in New Jersey long enough for the scent of distrust to permeate my skin and instantly give me away as an outsider.  It's probably the closest I've ever come to being in a Jordan Peele film.

If I ever make it to the Nether Realm I'll be sure and find somewhere I can purchase a magnet for the ever growing collection I have on my fridge.  It seems like the American thing to do.  I also hope that the residents of a place with such a name are in fact the exact size of this group of Tyrants from Radioactive Uppercut and Toy Art Galley, because they don't look too friendly.  Maxing out at 2 and a half inches tall, their brand of sorcery can't be but so potent, and their weaponry would be ike being attacked by a chipmunk wielding a razor.  I feel like that's the kind of fight I was built to win.

This set of six vinyl figures are packed with menacing detail and feature a paint job that Freddy Krueger would be get nightmares from.  You get the whole set of 6 for only $70 + shipping when they go on sale later today (Wednesday, April 17th ) at 3pm pacific time from www.toyartgallery.com.