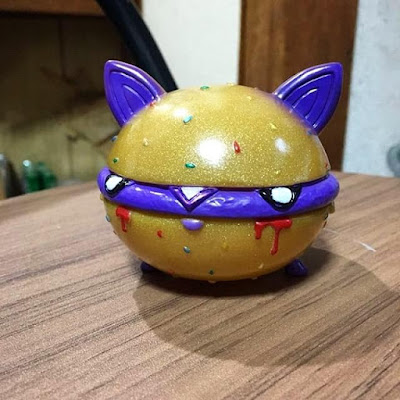 I didn't happen to catch the last Avengers film, but I got the gist of it:  Grimace's gym going cousin has a magic blinged out mitten that makes people go all pixelated and cease to exist.  It also doubles as a universal remote, stores your credit card info for faster payment processing, and can open any jar of pickles without needing anyone to loosen it first.  So my guess is the sequel that's coming out this weekend will involve the big purple guy getting his glove confiscated and his behind whooped for all of his shenanigans.  Don't even bother reading the reviews because no one will tell the story better and with more passion than I just did.

Nathan Hamill is piggybacking on all the hype for the new Avengers with the InfinityCat edition of his popular BurgerCat figure.  Now my question is if you are really hungry and you eat a powerful burger like this, will the power remain with you forever or will it only last until the digestion cycle is complete, thus transferring your super strengths to a much less appealing medium?  Marvel is not brave enough to make that film.

Each BurgerCat is made in luxurious Japanese vinyl by Science Patrol and will be available starting this Friday, April 26th at 12am est (1pm Japan Standard Time) exclusively from https://sciencepatrol.storenvy.com.