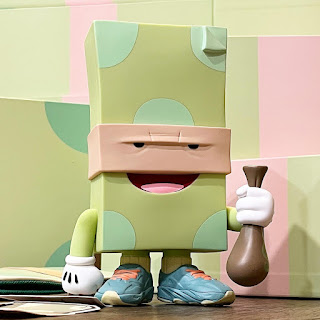 By now you know I didn't win the two billion dollar Powerball lottery, because if I had I wouldn't have typed any of this. I would be busy hiring a financial team to make sure I didn't end up like those dummies who lose all their cash and go broke five years later. I'd still buy plenty of dumb stuff like a spitting cobra fountain for the drive way, but I'd like to not get evicted and that be the last thing I see as they close what used to be my electrified security gate behind me. I'd also still eat mostly chicken nuggets and Minute Rice because it's important to remember your roots and because they're the perfect food combo no matter how rich you are.

I'm guessing Vandul didn't win either, mainly because he didn't say anything about it on Twitter. He did however say that he's got his brand new vinyl toy dropping this Friday. Named Racks, this wad of currency is masked up and looks like he just pulled a fast one on some unsuspecting sucker. Hopefully it was a big corporation who has been robbing us blind in the name of "inflation" while reporting record profits. I digress.

Each figure stands six inches tall and this version is limited to 100 pieces. You can snag yours on Friday, November 11th at 1pm central time from https://vandul.co/.

Email ThisBlogThis!Share to TwitterShare to FacebookShare to Pinterest
Labels: Vandul