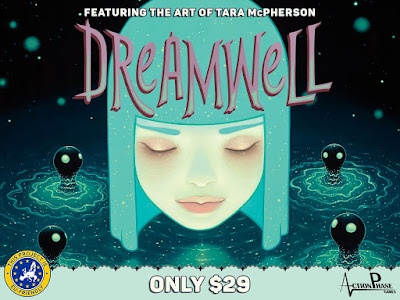 When I first heard Tara McPherson was doing the art for a new game I assumed it was gonna be for an app.  So then like a dummy I went and tried to download it, which is when I learned that it was actually a real life board game like Monopoly, which no one will play with me because I get way too intense. Basically I like to play until I put you in financial ruin and slowly begin to take everything you own.  And I laugh maniacally while I do it, which is probably the part that upsets people the most.  World domination isn't pretty though, and you better man up if you think you're gonna be buying up property in my neighborhood.

The game is called Dreamwell and the premise is that you're trying to locate some friends that have become lost.  It doesn't have the same nefarious dealings that Monopoly does, but think of that warm and fuzzy feeling you'll get when you rescue these poor lost folk despite the lack of cash reward.  And you can play with up to four people total, so when you win you can still celebrate like you scored the winning touchdown at the Super Bowl.  You should never pass up the opportunity to highlight your dominance in any competition.

Tara and Action Phase Games need your help to make this become a reality and are running a Kickstarter campaign to generate the funding.  Check out the link here and contribute what you can.  Even if you can't find someone to play with you because of your colorful history with board games, each piece would look really cool to decorate with.