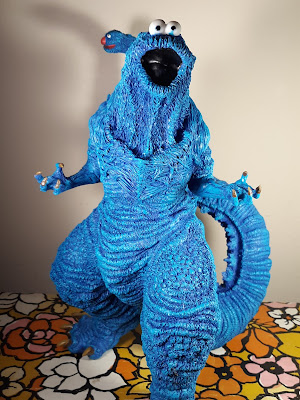 I can unequivocally, without question, assure you that this is the most ridiculously awesome thing I own.  Equal parts bad ass and absurd, Gabriel Marquez and Bottleneck Gallery have created the weirdest figure I have in my collection.  I love Shin Godzilla, and while my big takeaway from the movie was that a lot of bureaucracy is involved when responding to a giant murder lizard, I never would have connected him to everyone's favorite diabetic Muppet.  Luckily, I didn't have to do the hard work and just get to enjoy the end results. 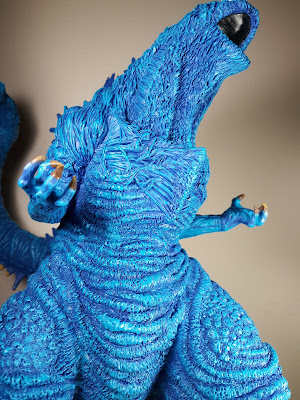 This thing is a behemoth in every sense of the word.  I don't know why I am surprised literally every time by a toy's size even though all of them clearly state their measurements beforehand, especially when I work with rulers every day.  He stands nearly a foot tall and is made out of resin, which make this big boy a good sized piece of plastic.  It's been a long time since I've gotten a toy that could double as a weapon, and one well placed smack would be deadlier than any can of Twisted Tea. 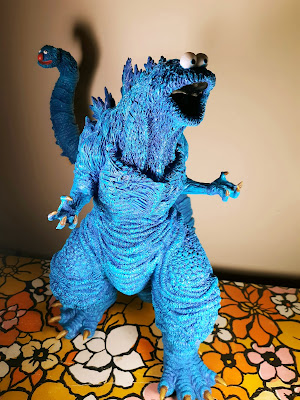 Despite being a figure that doesn't take itself too seriously, the amount of detail packed into this thing is astounding.  We're talking a full on, high end, movie quality sculpt that would rival any official Shin Godzilla release.  I love the pose of his little arms, like he's beyond frustrated that his local store already sold out of the Lady Gaga Oreo's before he could get there.  There's so much pain, so much longing, so much hell that's about to be unleashed on whoever bought all the limited edition cookies.

By far though my favorite detail, which borders hilarity and night terror-inducing, is the face of Grover on his tail.  I don't know whether to laugh or to cover it with a blanket while I sleep, though I suppose neither is the wrong answer. 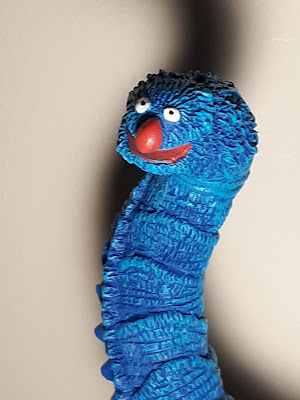 If you were unlucky enough to miss out on these fear not, because Bottleneck Gallery held some back for a second wave. Follow them on Instagram here for more info. And they have an entirely new sculpt they're working on with Gabriel Marquez featuring everyone's favorite flying insect which will be available soon. 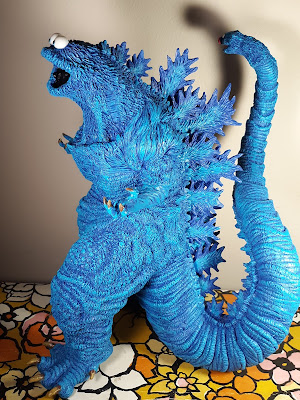 As an aside, my cats usually love photobombing my toy photos whenever I do reviews, but they all kept a healthy distance from this one.  These are the same cats that tried to punch a snake to death when it slithered in through a previously unknown hole in the wall, so I assumed nothing scared them.  My money is on Grover looking a little too untrustworthy. 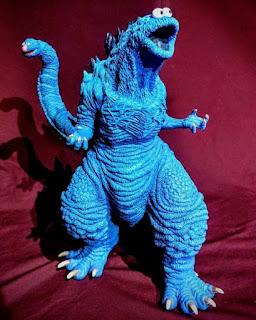 This story has absolutely nothing to do with this figure, but that's not going to stop me from telling it anyway.  Yesterday, my wife and I went to the zoo for the first time in what felt like forever.  The weather was warm but not too hot, which meant the animals were fairly active.  When we first arrived we saw a squirrel bury an acorn in an enclosure with a few monkeys, who seemed completely unbothered by his presence. My wife turns to me and asks "I wonder if they hide food in the dangerous animal's cages or if they're smart enough to know better?" A short time later, a snow leopard would answer her question.

The large cat had been asleep when we walked away from it and we wouldnt have turned around if the fence hadn't started to violently shake.  We walked back to see the snow leopard with the limp body of a squirrel hanging from its mouth.  It was horrific and fascinating all at the same time, because they certainly are fed plenty by the zoo, but that one misstep into its territory triggered its hunting instinct so quickly.  If there is to be a funny part to the story, which I'm sure you're waiting for, it would have to be the fact that the cat then paraded all around its enclosure with its trophy, including right up to the plexiglass window where a row of small children stood ready to be traumatized.  I can neither confirm nor deny that I laughed just a little when they screamed.

Speaking of screaming, if I were not a more reserved person I would have certainly screamed out loud at how genius this Shin-Cookiezilla sculpture is.  Grover's face on its tail is what sold me on this work from Gabriel Marquez, who will be releasing his monstrosity with Bottleneck Gallery today at noon.  Standing over 11 inches tall and made of hand painted resin, there will be 400 pieces of the blue version and only 100 of the red.  Priced at $100 and $125 respectively (which is a really good deal for the size), you can order one for your favorite toy blogger today (Thursday. October 22) at noon easter time by visiting https://bottleneckgallery.com. 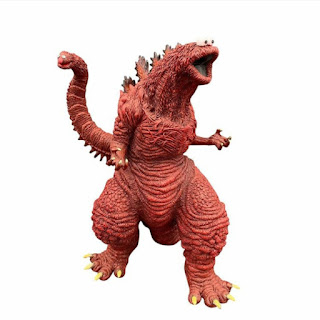