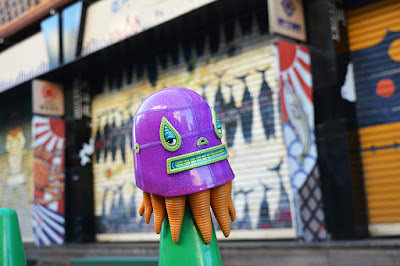 This toy right here has all the stuff I like:  Wrestling and squids.  And it's a toy, which I'm very into.  It was created by a man named Germs, which would not be my first choice for an alias because I am not a fan of unclean hands.  I'm much better than I have been in the past, but still not at the level where my wife can forget to put hand sanitizer in her purse and not expect an epic meltdown.  It's a guarantee that if we run out of the stuff that I'll accidentally touch something disgusting and be without a way to remedy it.  That's why my career in professional wrestling would never take off, because as soon as I had to grapple with a dude that had more hair on his back than his head, or if someone started bleeding all over the place I would forfeit.  Actually that's not the worst persona I could think of.  Get Vince McMahon on the phone!

I wish Lucha squids were real and their programming already a part of my overpriced cable package.  Until someone figures that out this one from the previously mentioned Germs and Toy Qube will have to do.  This vinyl dude from the deep stands seven inches tall and is sporting a full sized body mask in glittery purple.  Start your federation now by visiting www.toyqube.com.