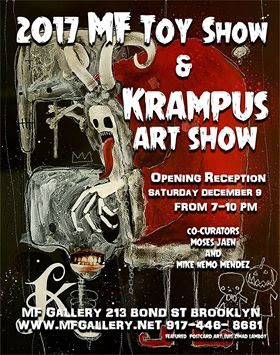 Do you think there's a place somewhere that is populated by goat people like Krampus?  Chewbacca came from an entire planet of Wookies, so it's not out of the question to think some unchartered northern island is loaded with Krampus families.  There's mommas, and daddys, and wee babies whose favorite game is beating little human dolls with sticks.  Krampus himself is like their Beyoncé, as he's their most successful citizen.  But he's better than Beyoncé because his widely popular albums are actually listenable.  Take that.

If you're a fan of Santa's evil little friend then you should check out the MF Toy Show and Krampus Art Show (that's a mouthful) in Brooklyn this weekend.  Curated by Mike "Nemo" Mendez and Moses Jaen, tons of your favorite toy customizers and artists will be represented with their take on Santa's more sinister half.  All of the info you need to go are listed in the picture above, so check it out and then spend a nice Saturday night in Brooklyn at MF Gallery.