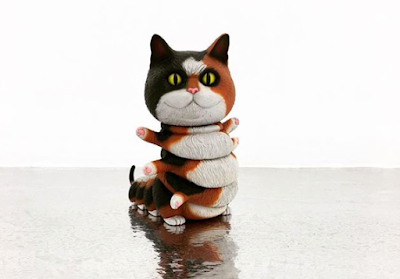 The only new cats that will be entering my home any time soon will be of the plastic variety, because I've got a kitty turf war on my hands as we speak.  Two of the five have decided that our house isn't big enough for the both of them, so the black one rolls up on the tiny one like a school yard bully, and the tiny one responds by trying to make force fields out of urine all over the place.  There's nothing quite like laying your head down in anticipation of a good night's sleep and having the serenity broken by a jet stream of pee against the wall.  That girl has some pressure built up and it has ballooned my paper towel budget to absurd levels.  If you find yourself in the same situation, Target sells a product called Urine Destroyer, which sounds metal as hell and really does a good job... and I now realize that this is the most elderly post I've ever written and I am only slightly ashamed.


While the idea of having a real life Kittypillar sounds pretty awesome, the science behind their creation is a slippery slope I'm not prepared to slide down.  So until kitties on some remote island in the South Pacific evolve naturally into this, we're going to have to dream about it vicariously through the work of Casey Weldon and 3A.  His latest version has a beautiful calico coat , stands eight inches tall, and has enough articulation to push all of your knick knacks straight off of the mantle.  This version is an exclusive to Spoke Art and is limited to only 100 pieces, so if you want one I would stop your procrastinating and get to adopting.  Get yours by visiting https://spoke-art.com.