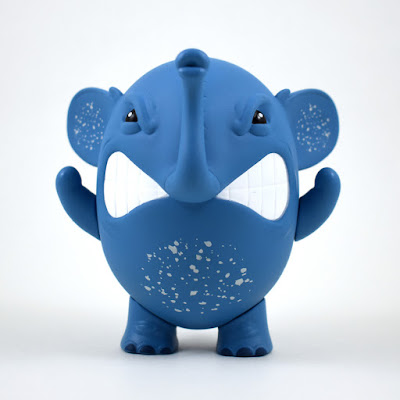 If I was an elephant who was blue I'd be pretty angry about things. For starters, unless you live in Smurf Village you have zero natural camouflage, making you a huge target for predators that think you might be blueberry flavored. Secondly, whenever anyone makes fun of people hallucinating they only use pink elephants to joke about what they are probably seeing, which would get old after a while and seems a bit discriminatory. If you were to do acid or bang your head unnaturally hard on a shelf at Wal Mart why can't you see blue elephants? And why couldn't you see green elephants for that matter? Do illusions of the mind have to maintain the same color standards as a gender reveal party? I'm about to compose a sternly written letter as soon as I can figure out who to send it to.

I have no idea as to why Charlie the Angry Elephant from AngelOnce and UVD Toys is actually in such a state, but I know that this version is an exclusive to Tenacious Toys. Pretty much any time you see a blue toy you should know that Tenacious has that on lock down, as it was passed into law in 2005 by the Designer Toy Council for a Better Tomorrow. This vinyl bro will be available starting on Friday, January 17th at noon eastern time.  He is limited to 50 pieces, will retail for $50 each, and can only be had by visiting www.tenacioustoys.com.