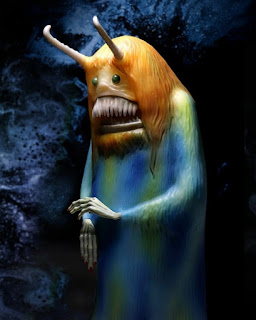 The beast that plagues our world right now is far from nameless, and I hope with all of my being that he will be a thing of our ugly past very soon.  If you're an American and can vote please do it so we can all go back to fully appreciating fictional monsters the way God intended and stop being kept awake at night by the one's running our country.

John Kenn Mortensen's work with Unbox Industries has produced some of my favorite toy releases in the past few years.  They are freakier than anything my overactive imagination could have come up with as a kid when I heard noises outside of my window.  Had I thought The Nameless Beast was lurking within striking distance I would have given up hope of ever being old enough to experience the joys of arthritis.

This latest version is known as the Witching Hour edition and will be released this Saturday, which also just happened to be Halloween.  It's like they planned it that way or something.  Invite the monsters in starting at 11am eastern time only from store.unboxindustries.info.