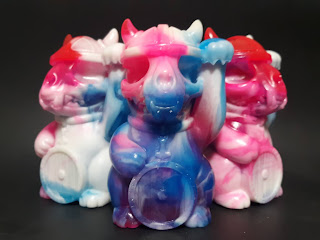 After a bit of a hiatus, New York Comic Con is  back.  Personally, I'm still not at the point where I want to be in a huge crowd of people or ride New Jersey Transit.  Sitting on the train into New York was always an adventure in germs before the pandemic and I've witnessed some of the grossest things in life on that 45 minute ride.  One of the worst was when this guy that looked like a less successful Machine Gun Kelly made his girlfriend stand up the whole way so he could lay his cheeseburger down in the seat next to him.  His unwrapped, unprotected cheeseburger sitting bare bunned on the molded plastic seat.  Periodically he'd pick it up, take a bite, and return it to its resting place.  I felt bad for the girl but then realized he'd be dead of some unknown illness in less than a week and could only hope she'd see the gift that was her new found freedom.

While I won't be physically at New York Comic Con, I will be there in spirit via my Nordic Lucky Cats.  These are the Odin's Eye edition and will be available exclusively through Tenacious Toys.  They are a tri colored marbled resin, standing 4 inches tall and limited to 10 signed and numbered pieces. And they also glow under blacklight!!!  Are they filled with ghosts?  Probably!

Produced by DuBose Art, each one is completely unique and a virtual steal at only $40 each.  Find them and tons of other amazing figures at booth # 1579 during the show and make sure to keep an eye on www.tenacioustoys.com afterwards to score any leftovers. 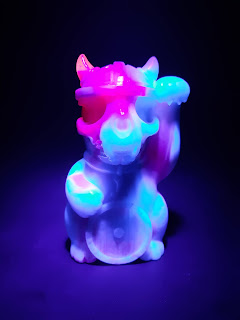