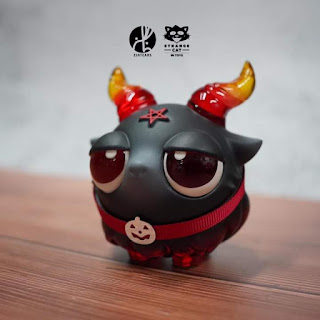 I'm not sure why I thought of this at the time, but not too long ago I came up with an idea for a soap called Bath O Met, and the wrapper would feature the goat headed deity sitting in a bathtub with a shower cap on his horns and a scrub brush in his hand.  I even made a mock up of what the packaging would look like, but ultimately decided that I actually had no interest in making soap.  I still think it's funny and if anyone out there does like making soap and would be willing to make one that is black and smells like sulfur, we should talk.

My version certainly wasn't as cute as this little guy from Zintears.  This is Bobbi the Baphomet, a little resin guy that is an exclusive release from Strangecat Toys in the US.  You don't have to be a member of the Knights Templar to be completely charmed by those sleepy eyes!  All you need is $75 and an internet enabled device when they go on sale this Friday, October 22 at 11 am eastern time at www.strangecattoys.com.