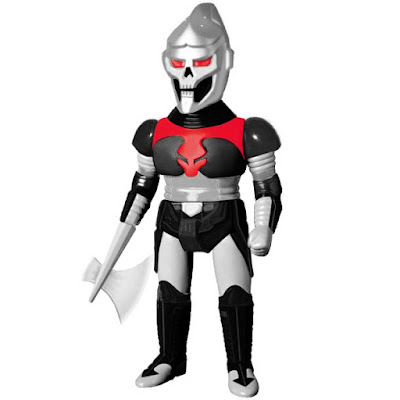 When it comes to giant robot weaponry, you just can't go wrong with an axe.  Anyone that would use an axe as their primary fighting tool is someone that should be feared and avoided at all costs.  That dude is either stone cold crazy or the deadliest man on the planet and either way it spells bad news for his opponents.  During the American Civil War there was a group of dock workers from Louisiana that charged into the first battle of Manassas wielding Bowie knives after discarding their muskets, which must have looked as insane as it sounds.  They didn't make it very far, so they were more of the "crazy" variety rather than the "complete badass" sort, but what can you do.

This is Death Jaguar, a nine inch vinyl killing machine from toy designer Rocom.  He is part of a Kickstarter campaign that as of this writing is 80% funded with 22 days still to go and plenty of rewards left for you to obtain.  There's different color figures, customs, original art, and just about anything else you can think of to support the narrative of this intriguing looking character.  Check it out by clicking here.