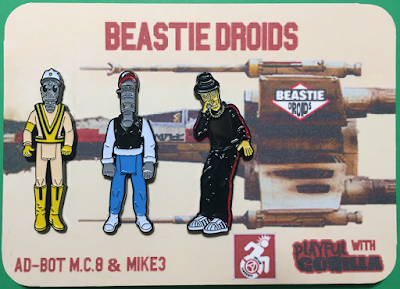 When I was a boy I had a killer denim hat with a panther enamel pin lodged in the front.  Then I had to go and get a wicked case of head lice and my mom chucked that thing in the trash because she swore it was harboring little fugitives.  She wouldn't let me get my sweet panther pin, even though there was no way scientifically speaking that anything was living on that.  I could have put it on my matching jean jacket, or I could have saved it in my treasure box until I was older to prove how tough I am so I wouldn't have to tell everyone like I have to do now.  Parents need to think about this stuff before they over react about a little infestation.

I know I've told that story before and it's cool because it's the only enamel pin experience I have.  Oh, it's true, after my panther was ripped from my life I never bought another one, so every time I write about pins I'm gonna recycle that trauma.  Dead Greedy is trying hard to melt my hardened heart with these wearable versions of his Beastie Droids figures.  They've been featured on a hit television comedy and have a place in collections around the world and now they can adorn your wardrobe.  You get all three pins for $25 packaged up to look just like the bootlegs that inspired them.  Order yours at http://www.deadgreedy.com.