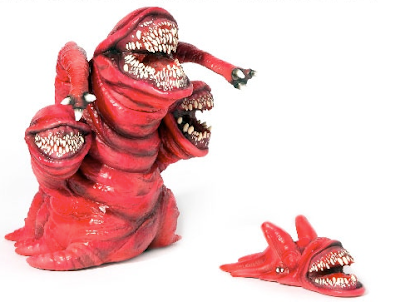 No, this is not one of the parasites from the next season of Monsters Inside Me, though if a doctor were to ever find something like this growing within someone I hope he has the presence of mine to put them down.  Tapeworms are horrifying enough, especially when they decide they need some air fresher than that of your inner colon and venture forth from your backside.  There's nothing out here for you little buddy, so you just stay inside where I can be blissfully unaware of your presence.  Editors note: I do not actually have a tapeworm.

While this may look like the result of eating undercooked pork, it is actually the star of the cult classic horror film The Deadly Spawn.  Justin Ishmael decided to bring him to frightening life by turning him into an officially licensed vinyl toy, which is now on Kickstarter to raise money for production.  As of this writing he has received 83% of his goal in just under two days, so I think it's safe to say this nine inch tall monstrosity and his larvae are well on their way to becoming reality.  Both of these figures were sculpted by toy industry legend James Groman, who you may know from such famous lines as Madballs or his own crazy Kaiju figures that defy logic in size and detail.  Check out the link here to get in on this campaign and score these figures in their various iterations. 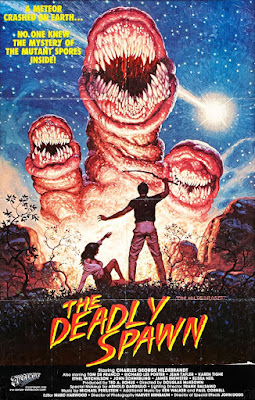