The Rock-afire Explosion's Billy Bob in Vinyl from Justin Ishmael 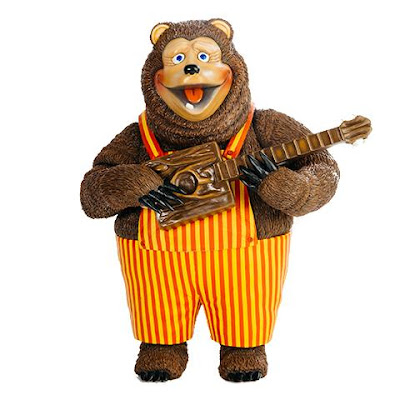 This one is bringing back some crazy memories for me and the love I have for anthropomorphic automatons and the pizza that came along with them.  I was all about Showbiz Pizza as a kid and was beyond mesmerized by the Rock-afire Explosion.  Their music wasn't great, but I loved watching as the robotic band wearing the skins of friendly wooden creatures came to some form of life unlike my own.  Looking back I'm sure you could trace a healthy amount of children's nightmares back to this group and their rodent successor Chuck E. Cheese.  But at the time who could have ever foreseen the possibility of the hulking mechanical behemoths being anything but wholesome as their dead eyes blinked audibly when they sprang to life in a restaurant that could serve not only an Italian staple but as the actual waiting room to Hell?  I could swear to you I had the best time there and somewhere I have the pictures to prove it.

All kidding aside, this vinyl rendition of band leader Billy Bob captures a time in many of our lives that was filled with wonderment; where our biggest concern was the possibility of running out of golden tokens.  Relive it all thanks to the hard work of Justin Ishmael as he offers this officially licensed figure for preorder.  There are two versions available to collectors: the standard which includes the 11 inch tall toy, or the deluxe which comes with an exposed animatronic head and Birthday Bird.  There's also pint glasses and t-shirts so you can make Showbiz Pizza an entire lifestyle choice, which honestly should happen way more often than it does. 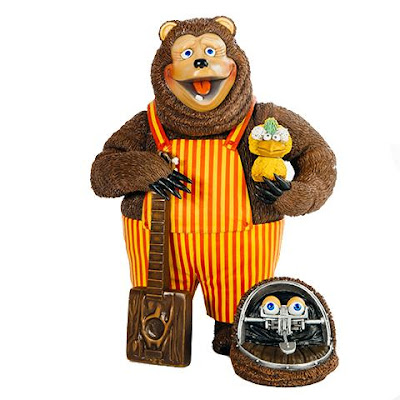 Everything can be found by visiting https://www.justinishmael.com.