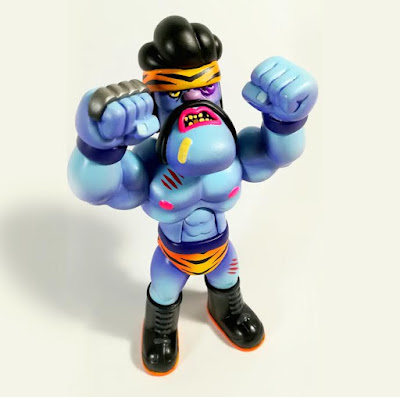 I love me some wrasslin, and just thinking about it gets me all hype.  Not hype enough to actually wrestle, because I learned yesterday that I have arthritis in my right knee.  My knee cap is as crooked as our country's administration, and it's been grinding away.  I only went to the orthopedist because it became difficult to walk up the stairs without being mistaken for an extra on the Walking Dead, so a couple of X-rays later I had my diagnosis.  Oh, and I got a cortisone shot, which is its own special brand of interesting.  The doctor first found the space in between bone and tendon, sprayed it with a numbing agent, and STUCK THE ENTIRETY OF A FOUR INCH HYPODERMIC NEEDLE INTO MY KNEE.  I'm talking this sucker was buried to the hilt, which I was not warned about ahead of time, so I'm sure I made one of my famous WTF faces.  Truth be told I didn't feel much of anything, and I guess a heads up about what he was going to do would make most people get up and leave, but it was still a bit of a shock to see the whole thing disappear into my body.  I hope that is the last time I ever have cause to write that sentence.

I will have to live my Wrestlemania dreams vicariously through Tiger Guts Taylor, a resin figure from artist Rultron.  This dude is 20 cm of suplexing fury that is out there wrestling intergalactic punks in space so that he can earn his passage home, which sounds like a way better plot than the last Star Wars film.  He was produced by Dead Hand Toys and can only be obtained by emailing rultron@gmail.com.