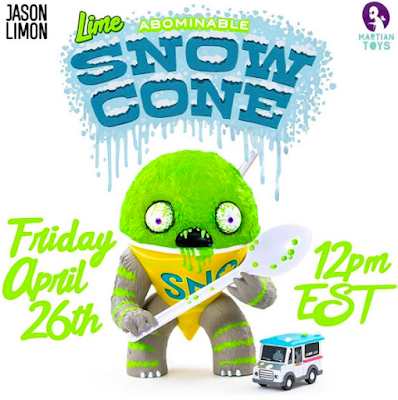 The word "abominable" is as equally hard to spell as it is to pronounce correctly.   When I say it I make a distinctive "d" sound right in the middle as I'm pretty sure I've done my entire life.  And then I thought about how many times I could have possibly been in a situation where I needed to use that word to begin with.  Other than talking about a monstrous snow man there literally has only been this toy.  Thank God for spell check for not allowing me to butcher its construction as I type this.

Hopefully my turmoil involved with this word has inspired all six of you to say it out loud as if you were conjuring the dark essence it's mispronunciation evokes. That is my gift to you on this Friday.  My other gift is to tell you about the return of Jason Limon's Abominable Snow Cone figure in the all new lime colorway.  Martian Toys worked with Jason on this frozen treat beast that was voted Toy of the Year at the Designer Toy Awards a few years back, and you can pick up this version when they go on sale today (Friday, April 26th) at noon eastern time from https://martiantoys.com.  Brain freeze sold separately.