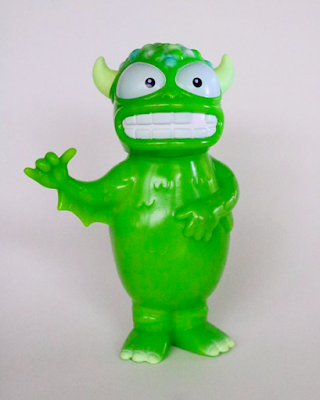 While Greasebat is hanging ten you can catch me hanging out on the boardwalk.  Having lived by the ocean most of my life I am surprisingly not much of a beach person.  I wanted to try surfing when I was younger, that is until I got stung by a jellyfish all up and down my legs and my need for being in the sea abruptly ended.  I was maybe 9 at the time, minding my own business in waste deep water, when the rage of Poseidon latched onto my skin.  Clear gelatinous tentacles delivered sting after burning sting of liquid fire all while that smug snot ball they dangled from laughed maniacally.  The real horror struck me when I got back onto the beach and had to tell my mom what had happened.  Red lightning shaped welts turned my skin into a topographical map and I, as well as any other kid who revels in arcane knowledge knows, there's only one way to make the pain go away:

And whenever such a thing happens on tv they never pee in a cup first and then throw it on the affected area.  Nope, the dose has to be administered directly from the source, which is horrifying on levels I refuse to explore.  Of course now I know that having someone tinkle on your wounds is kind of dumb, but I was scared to death some Good Samaritan was gonna rush over, drop their Speedo, and practice the most shameful of first aid.  I grabbed my stuff and ran back to our car before there could even be a discussion about what might happen next, not willing to be traumatized any further than that simple organism at high tide had already managed.

Jeff Lamm has taken his world famous character and dropped him right in the midst of California Kulture with this latest release with Glyptigo, who also happens to be his wife.  Gotta keep those Greasebats in the family!  If you want one for your brood, they will debut today (Friday, April 19th) at 3pm eastern time at https://glyptigo.com.