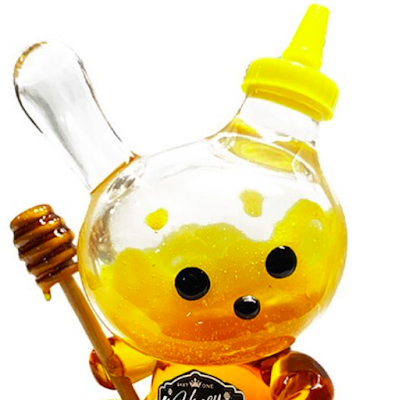 Did you know that honey never spoils?  They've found it in the tombs of ancient Egyptians and you could totally still dip your chicken nuggets in and eat it.  In a way it would be kinda cool to eat something that's as old as a Pharoah and not die immediately from butt worms, but on the other hand the mere thought of it would cause me to make myself sick the moment it hits my stomach.  And why would someone be buried with a jar of honey anyway? Was he really bad in life and hoping to bribe Anubis when he weighs his heart against the feather?

Anubis:  "Dude your heart is way too heav...hey is that a jar of honey?  I haven't had honey in, like, forever!!!   They used to stock it in the underworld commissary, then there was the problem with the bears and ugh, it was just such a mess."

Anubis:  "Oh, snap! I guess my scales need to be recalibrated cause you are headed right to the good place, my man. Enjoy your afterlife and whatnot."


***Eddie Money's "Two Tickets to Paradise" blasts over the loudspeakers***

Sket -One doesn't want you to have to start digging up dead bodies looking for something to put on your toast, so he is releasing this eight inch Used Honey Dunny for a special 24 hour preorder.  This resin figure saved a little bit of its goodness for you and will be available starting today (Friday May 3rd) at 9am pacific time.  Anyone who has ever seen one of Sket's pieces in person can tell you that this thing will be so flawless that you will probably stare at it until you get hungry and have to run out to the grocery store.  They're magic like that.  Satisfy your need to eat and your need to collect at https://sketone.storenvy.com.

Email ThisBlogThis!Share to TwitterShare to FacebookShare to Pinterest
Labels: Dunny, Kidrobot, Sket One