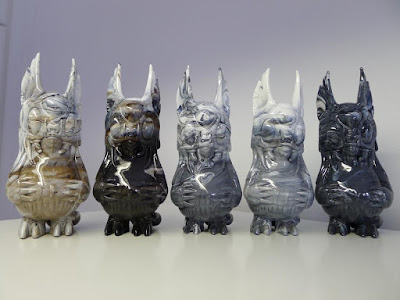 Marbling isn't just for kitchen counter tops or quality cuts of meat; it is also the pinnacle of luxury in toy production.  Oat of the time I'm fawning over a release that features multiple colors of swirled vinyl, but the same effect can be achieved in resin by talented artists.  Brent Nolasco has put his creation Gordo into the hands of resin commander Task One and the results are beyond spectacular.  Each one looks as though it was found in a cave, polished up to a nice shine, and ready for display in the Smithsonian.  Instead, these works of plastic can reside with you and your guests will think you've recently come into money to be able to afford such stunning pieces.  Your secret is safe with me.

These are available now by visiting https://brentnolasco.bigcartel.com. 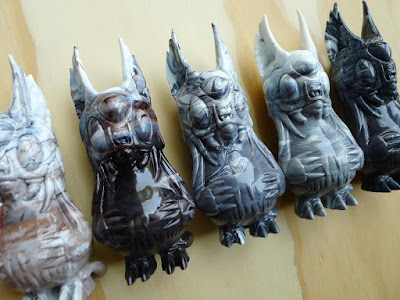 Email ThisBlogThis!Share to TwitterShare to FacebookShare to Pinterest
Labels: Brent Nolasco, Task One 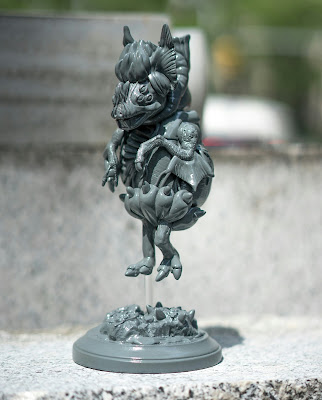 Brent Nolaso is one of the most imaginative figure artists out there today.  His work never feels derivative of anything else I've seen and he paves roads with his creatures that most people aren't capable of driving on.  His latest release is entitled Arc of Time and if anything it pushes his work even further than he's ever taken it.  Made of five separate pieces of resin, each figure comes with a base and acrylic rod to suspend it (which is removable).  Sculpted by Brent and cast by resin wizard Task One, you can order one of these 11 inch tall figures now at brentnolasco.bigcartel.com.  They retail for $350 each. 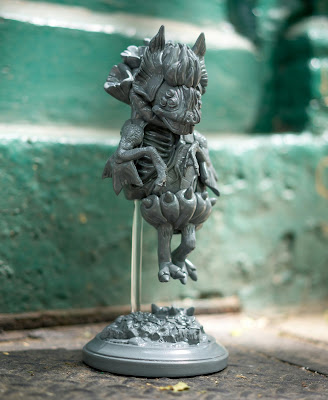 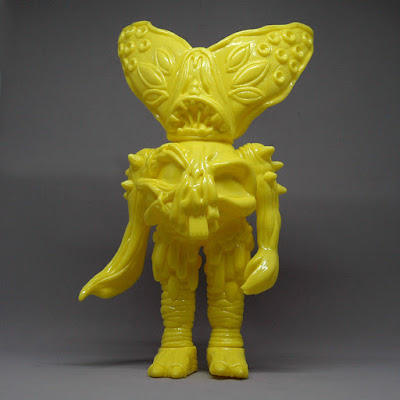 This is why you never eat undercooked pork.  Forget Freddy or Jason, those dudes aren't scary; parasites dying in your brain tissue is scary.  My behavior is already erratic and doesn't need any help from rotting little critters in my frontal lobe.  Not to mention what they do before they die.  Now I won't be able to sleep.

Brent Nolasco's Bloodthirst looks all innocent in this bright yellow color way, but don't let his sunny disposition fool you.  He's out for your bloodiest of tissues.  Toy Art Gallery is unleashing him into,the water supply on Wednesday, March 30th at noon pacific time.  Get him only at www.toyartgallery.com 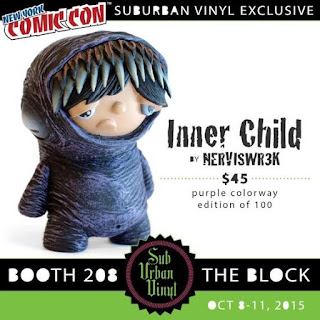 Man it's getting down to the wire for New York Comic Con and I'm here scrambling to tell you about everything you're gonna want to track down the minute the doors open.  I won't be able to make it up there until Saturday, so I hope I'm not the last vulture to the corpse and all that's left are the toe nails.  That was a really disgusting analogy and hopefully you weren't eating when you read it.

SubUrban Vinyl will be holding down their usual spot at the giant Tenacious Toys compound, which is also known as booth 208.  Take a look see at a few of their exclusive items they'll have available for your toy shopping needs: 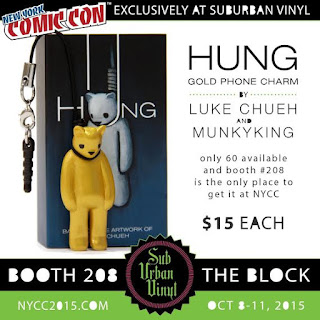 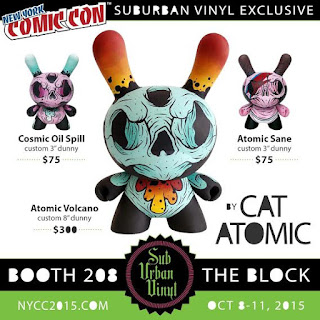 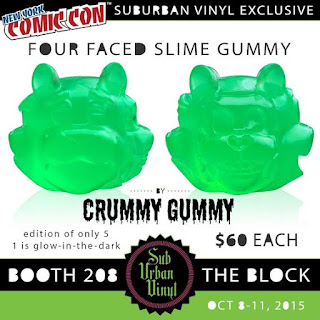 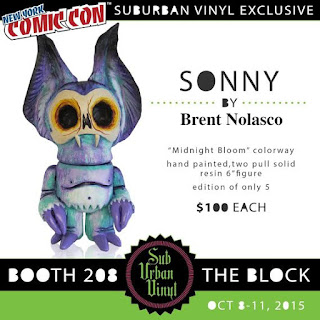 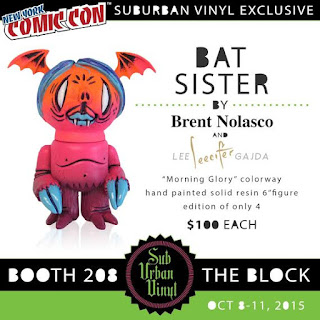 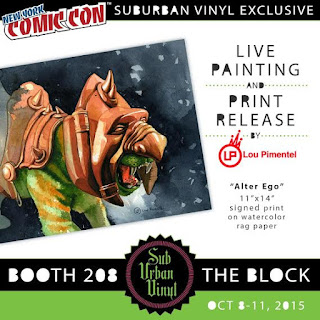 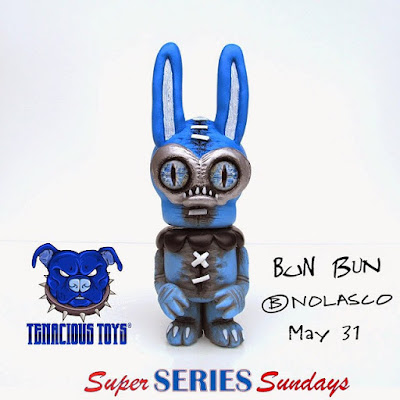 I bet this guy is related to the bunny from Monty Python and the Holy Grail.  Though he doesn't look as fluffy, or as innocent, but he does have the sharp pointy teeth and that's gotta be an isolated genetic anomaly.  We better hope so any way, cause the bunny uprising is the last thing we need right now.

Brent Nolasco's resin Bun Bun figure got himself a blue makeover to be part of Super Series Sunday tomorrow from Tenacious Toys.  Only 7 will be available when they go on sale and at just $75 each they won't last long.  And this is a lot of toy for your money too; just look at how big it is in the hands of a grown man: 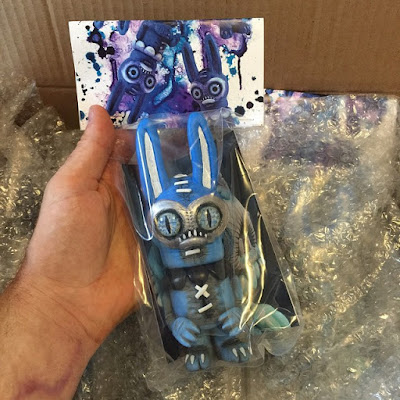 Those aren't baby mitts people!  Be ready at 8pm eastern time tomorrow when this sucker goes up for sale only at www.tenacioustoys.com 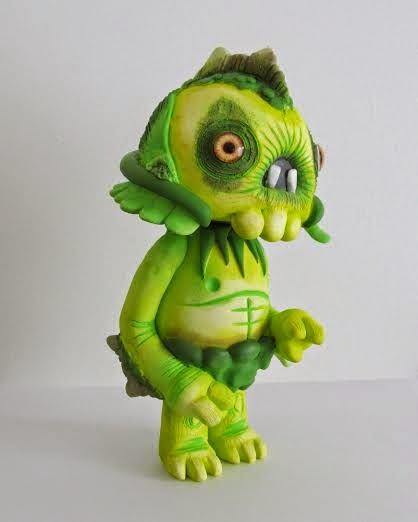 Wait a second, are you telling me the guys from Suburban Vinyl are actually allowed to leave the state?  California is in for it as the Robs will be making the journey to set up at this weekend's Designer Con.  But they won't be showing up empty handed, as they will be bringing with them many quality wares for to peruse at booth # 515.  Let's get to it.

This Brent Nolasco figure looks like a pretty chill bro.  I'm sure he scares visitors to his swamp when they see him coming towards them, but all he really wants is someone to talk with about the new episode of American Horror Story.  He thinks they should drop the musical numbers and reign their wacky story telling in just a tad to make a more concise experience for the viewers.  He's got a lot of opinions about shows.  Only 3 of these in this color scheme exist in the world and you can be one of the proud owners for $120. 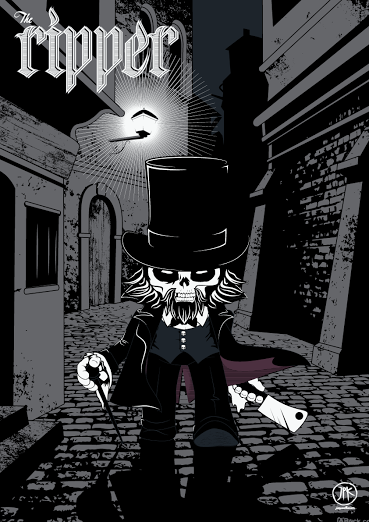 Look, I get it, you think that if you hang Starry Night on your living room wall that naked chicks are just gonna fall out of the wood work for how artistic and sensitive you are.  It's a load of crap, in fact women should beware of any man who tries to use this ploy, cause it means they don't like art enough to explore it beyond a picture that is offered by Capital One as an option for their first credit card.  And if it's hanging next to a Bob Marley poster or one of "beers of the world" you need to get out of that house immediately before you needs years of counseling to undo whats about to go down.  The Toy Viking is nothing if not a resource for keeping women safe.

Now if you're at someone's house and they have a picture like this one from Jon-Paul Kaiser, then you've got the green light to have all of their babies.  For $70 you can up your art game with one of these prints that are signed and numbered to 50. 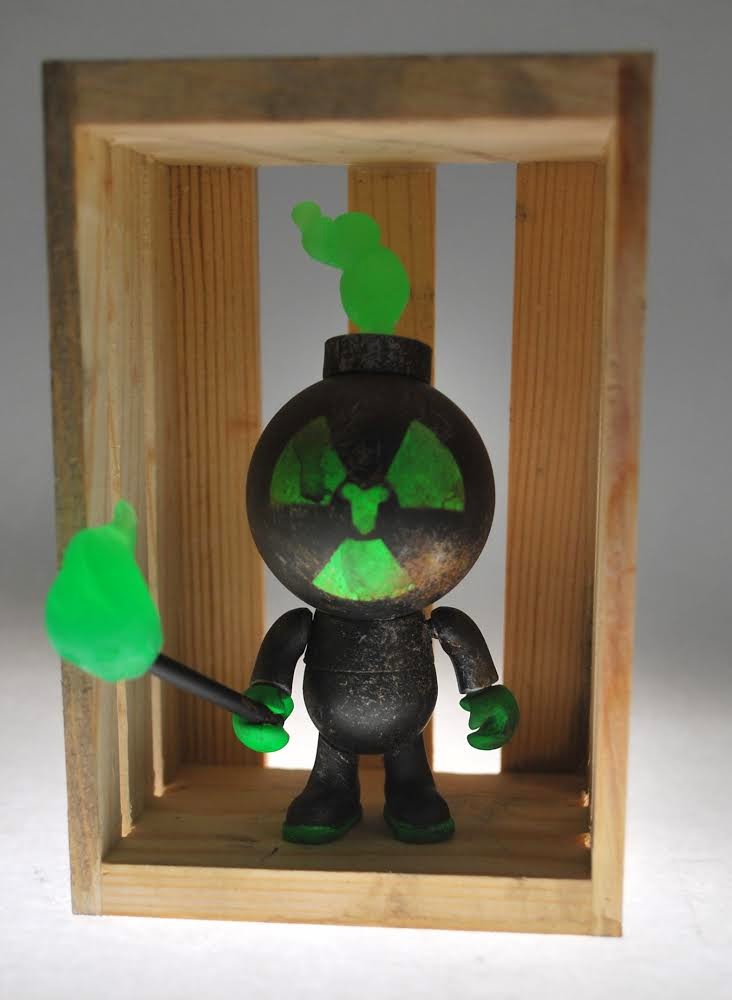 If the power happens to go out in Pasadena don't worry, because they will have enough glow in the dark toys at booth 515 to light the bathroom up so you don't pee on yourself.  Like these Bio Buds from Manny Romero or these Primordial Ooze Munny heads from artisdead with little ninja turtles trapped inside.  They will be priced at $40 and $21 respectively. 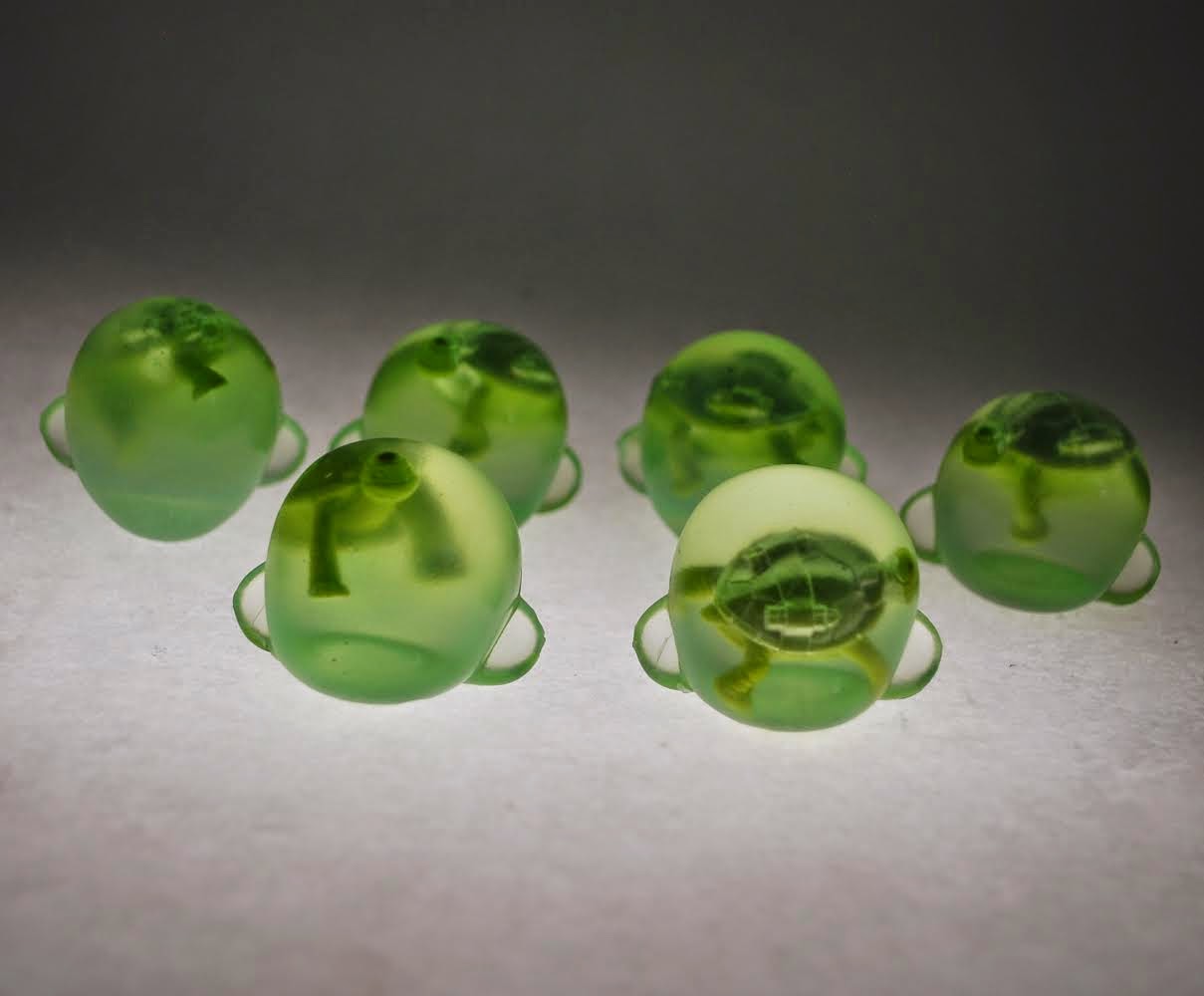 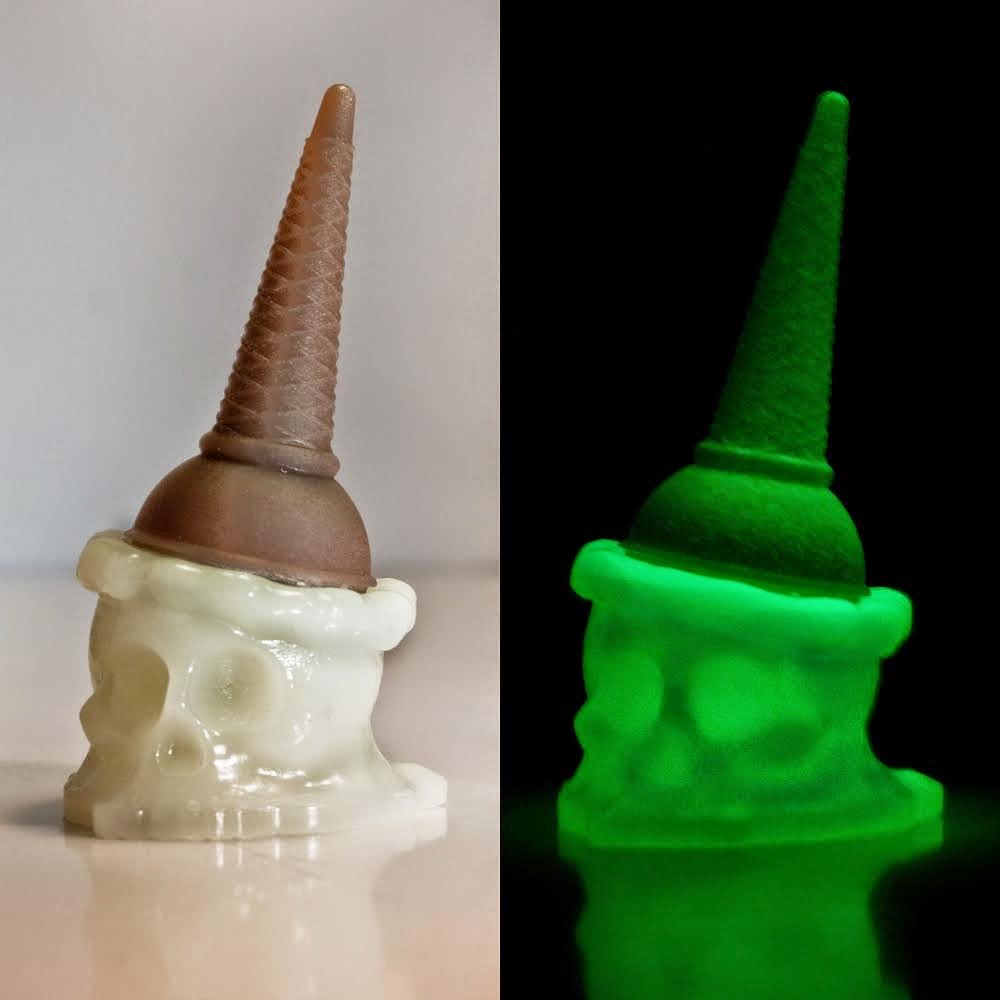 Or get yourself a mini Ice Scream Man from Brutherford Industries to light your way during those dark moments.  Get one for $20, but please don't lick it cause people will stare.
Posted by Chris at 12:59 PM No comments: 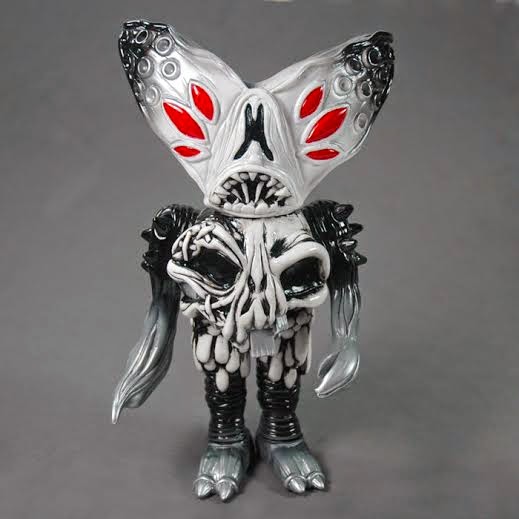 I recently learned that my wife will not as a matter of fact be excited by all of the discoveries I make in life.  I don't know if it's because we're getting older or what exactly, but we've recently become more outdoorsy.  We found this creek about an hour from where we live where people routinely go to dig up fossils.  Sounds like fun, and when I was in kindergarten I wanted to be an archaeologist and dig up mummies in Egypt, so it was the chance to realize an early childhood dream.  We've been a few times and found some shark teeth, a bunch of clams, and a few squid with no incidents.  Then we went last week and I was walking around in the water, seeing what the recent rain had unearthed and I saw what looked like our biggest squid fossil to date.  Turned out it was just a stick, but on the underside of that stick was a big friggin leech.  Now I've seen leeches plenty of times, but they've alway been preserved in jars.  This was the first time I'd ever seen one in the wild.  I turned to my wife, who was a few feet behind me on the shore, and asked her "have you ever seen a leech before?"  What followed next was a blur of curse words and threats on my well being, but I do remember her saying "I hate ticks and I hate slugs, so what makes you think I want to see a slug tick?"  Fair enough, I just had no one else to share my Crocodile Hunter moment with.  I named him Tito Santana, put him back in the water, and went about my business.  After a visit to the Cheesecake Factory most, if not all, was forgiven.

I'll never forget those good times Tito Santana and I had, and now I don't have to because Brent Nolasco has made this figure that will forever remind me of our brief yet emotional time together.  Produced by Toy Art Gallery, the Blood Thirst Night Stalker edition is quite possibly the most frightening thing you've seen all day.  His name pretty much sums up what he's into, not that you couldn't tell by the menagerie of sharp pointy teeth he has everywhere.  He will be unleashed on an unsuspecting world tomorrow (Friday the 15th) at noon Pacific time at http://shop.toyartgallery.com/ and in their physical store.  My wife said I'm not allowed to have one because I don't know how to act. 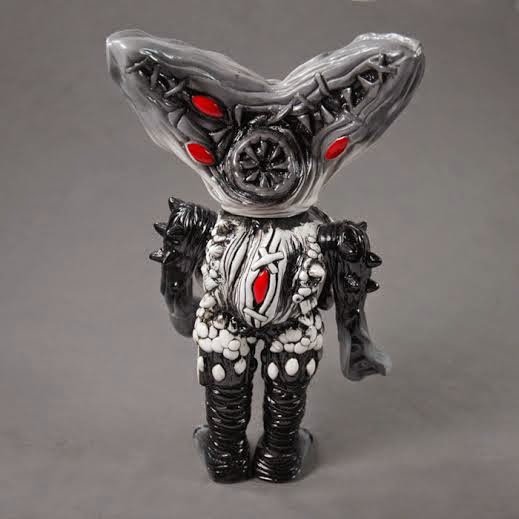