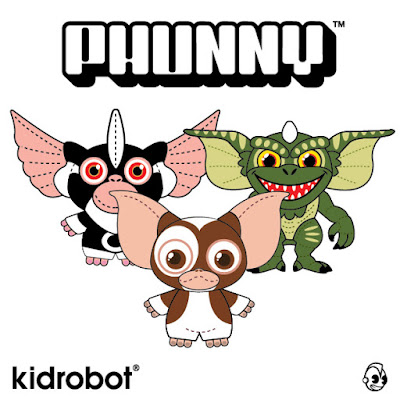 Fun fact:  my wife has never seen Gremlins.  I don't hold it against her though, because I work with  multiple people that have never seen Star Wars, which I find to be highly unusual.  I'm pretty sure the United States government keeps records on people that haven't seen Star Wars and closely monitors their behavior for further anomalies, and upon finding them will sneak in and said people will disappear under cover of darkness.  Save yourselves and watch the films.

It doesn't matter if you've seen Gremlins or not to know that Gizmo and pals are quite adorable, even after some of them turn into naughty little reptile thingys.  Kidrobot has captured that in a new plush series they're calling Phunny, which are 8 inches tall and ridiculously affordable at only $16.99 each. Collect them all when they're released in August.

Oh, and it's worth noting that this is the first time Kidrobot has utilized the many licenses that their parent company N.E.C.A is known for.  I wonder what could be next? 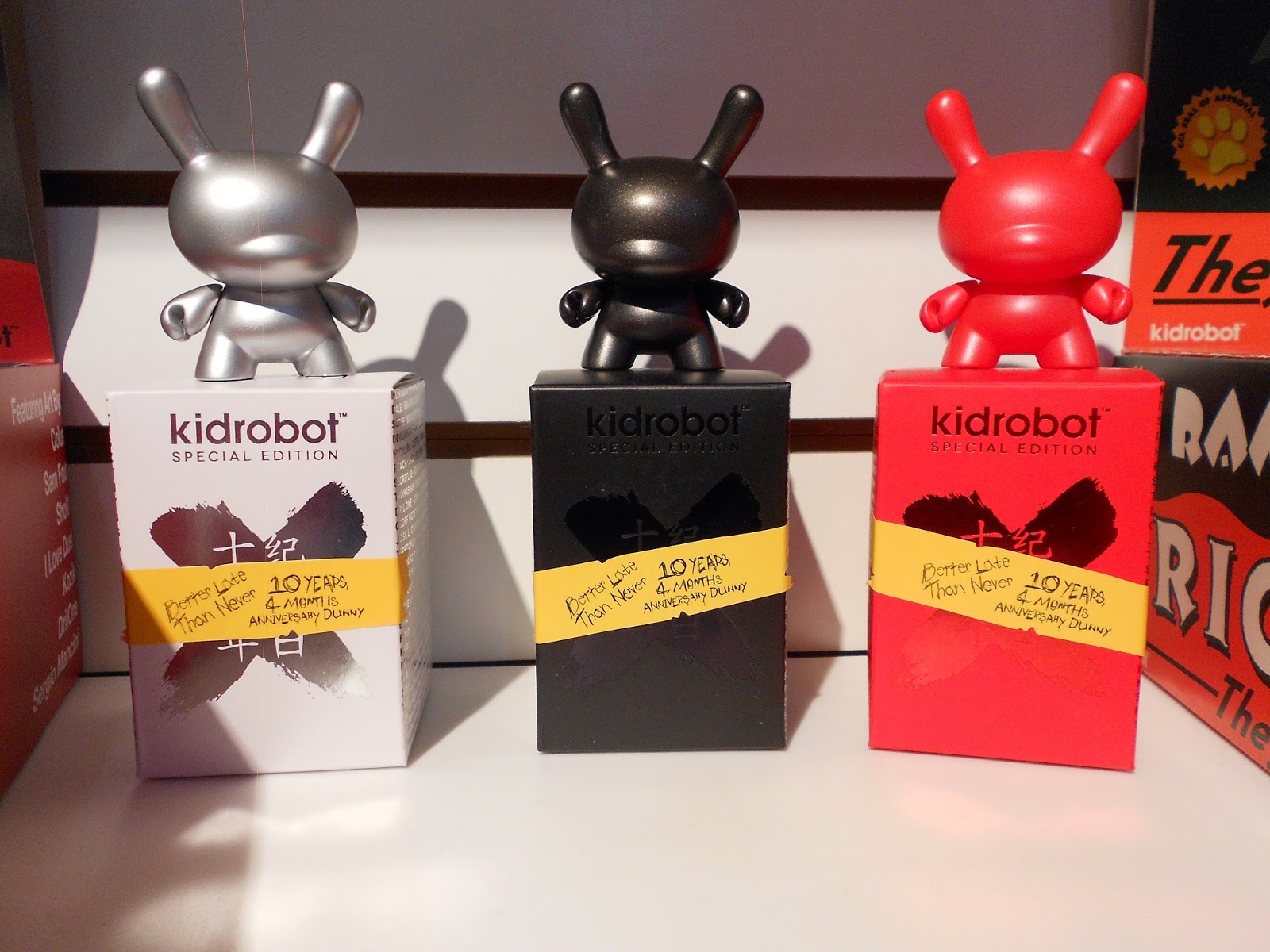 We all are well aware that Kidrobot is in a heavy transitional period, not only with their purchase by N.E.C.A. but with naming Frank Kozik as creative director.  Many people are still skeptical while many more are hoping for a return to what it was in the past.  I can tell you right now that things are not going to return to what they used to be and after the conversation I had at Toy Fair, you wouldn't want them too.  That's because they're focused on the future, which is paved with possibilities you wouldn't have even thought of and that will return a level of excitement to the world of designer toys that has been lacking.  I spent over an hour talking with Frank and new head of marketing Steve Elmes and here are some of the highlights from our discussion:

- The rules are out the window.  You will see production pieces using any and all of the Munnyworld characters.  This will not only include stand alone figures but complete blind boxed mini series.  If the design makes sense and is cool, it will happen.  The first series to encompass this new philosophy will be this set of Tricky Cats that will debut later this year: 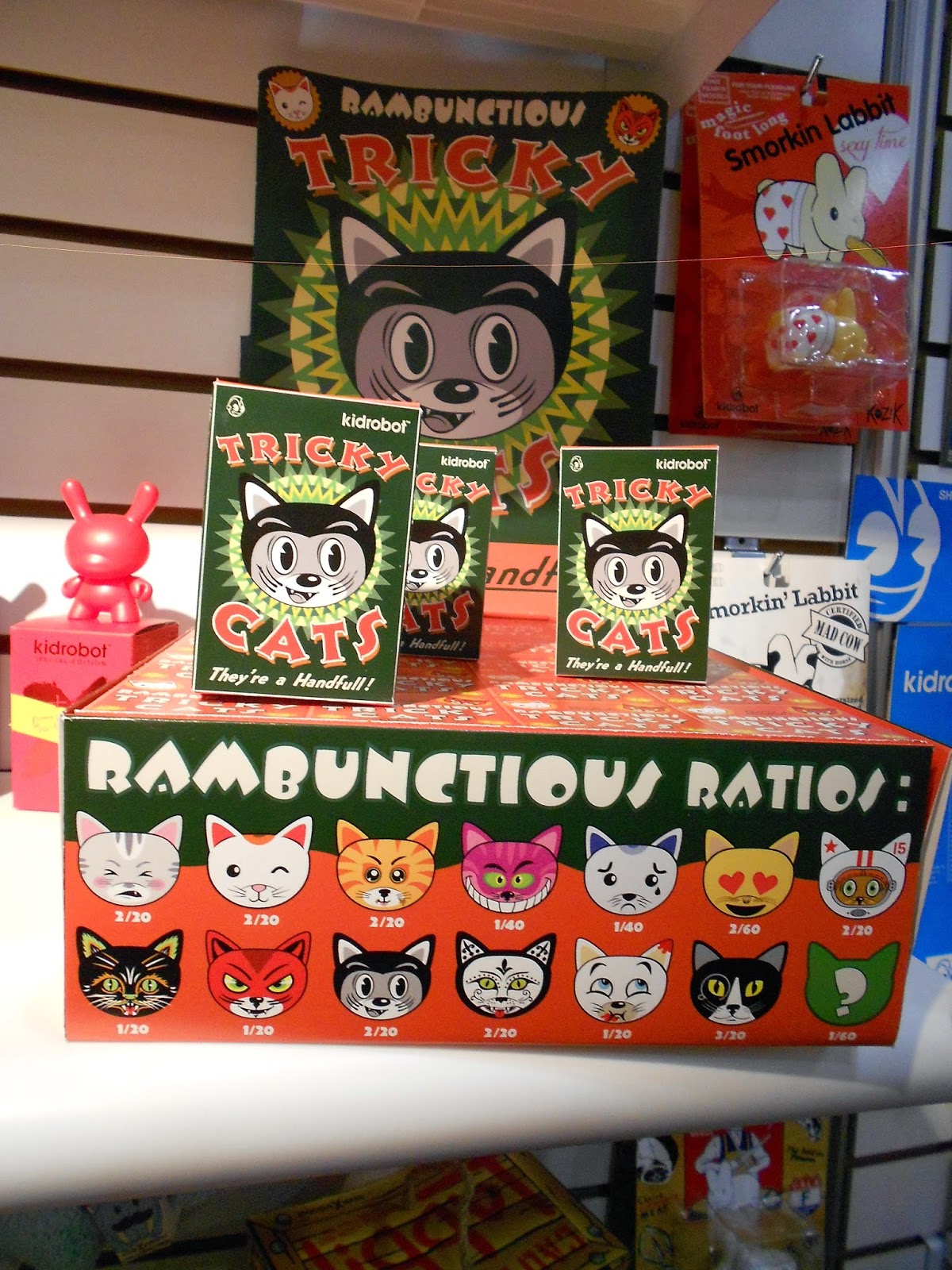 This is an in-house series with a few Kozik designs and the rest created by their design team. They're cute, they've got great mass appeal, and they will cater to not only the seasoned collector but someone who just likes their look and uses them as a gateway drug to fuel a new toy addiction.  It's a great way to build a new collector base while appealing to the already existing one.  There are going to be many more series that will be single artist driven that you will absolutely lose your mind for.  Trust me, as soon as I heard the names involved I started looking for a second job so I can afford them all.

-  If you're a toy customizer the ability to have an actual Kidrobot piece has never been greater.  Seriously, they are scouring social media on a daily basis to look for new talent.  Keep posting your custom figures but more importantly keep refining your work because they want to make your stuff.  There is no longer a stable of artists that they will only pick from when deciding what to produce.  If what you make is awesome, you've got as good a shot as anyone of getting into a Dunny series.

-  A lot of people were talking about their stance on bootlegging vs. customizing from a few weeks ago and those discussions have led to something really interesting.  There will be a submission period in the near future where people who want to make resin multiples or a series of Dunnys that is just too complex to factory produce will be able to propose their ideas and possibly be granted a license to go ahead and make it themselves.  Not only does that make your toy super legit, but they will even help you promote it.  Again, now is the time to refine your technique and get your work on social media to start building hype.  More info will be available soon on this program.

-  Almost any license N.E.C.A. has is open to Kidrobot.  Now for those of you that aren't into licensed toys, what if it was your favorite artist putting their spin on it?  What if Tara McPherson made an Alien toy, or if Skinner tackled Friday the 13th?  Not that those particular ones are coming out (I'm not trying to start a riot here) but they could happen in this new philosophy of anything goes.  From what I understand the ball is already rolling on a few.

-Mega Man is happening and here is the proof: 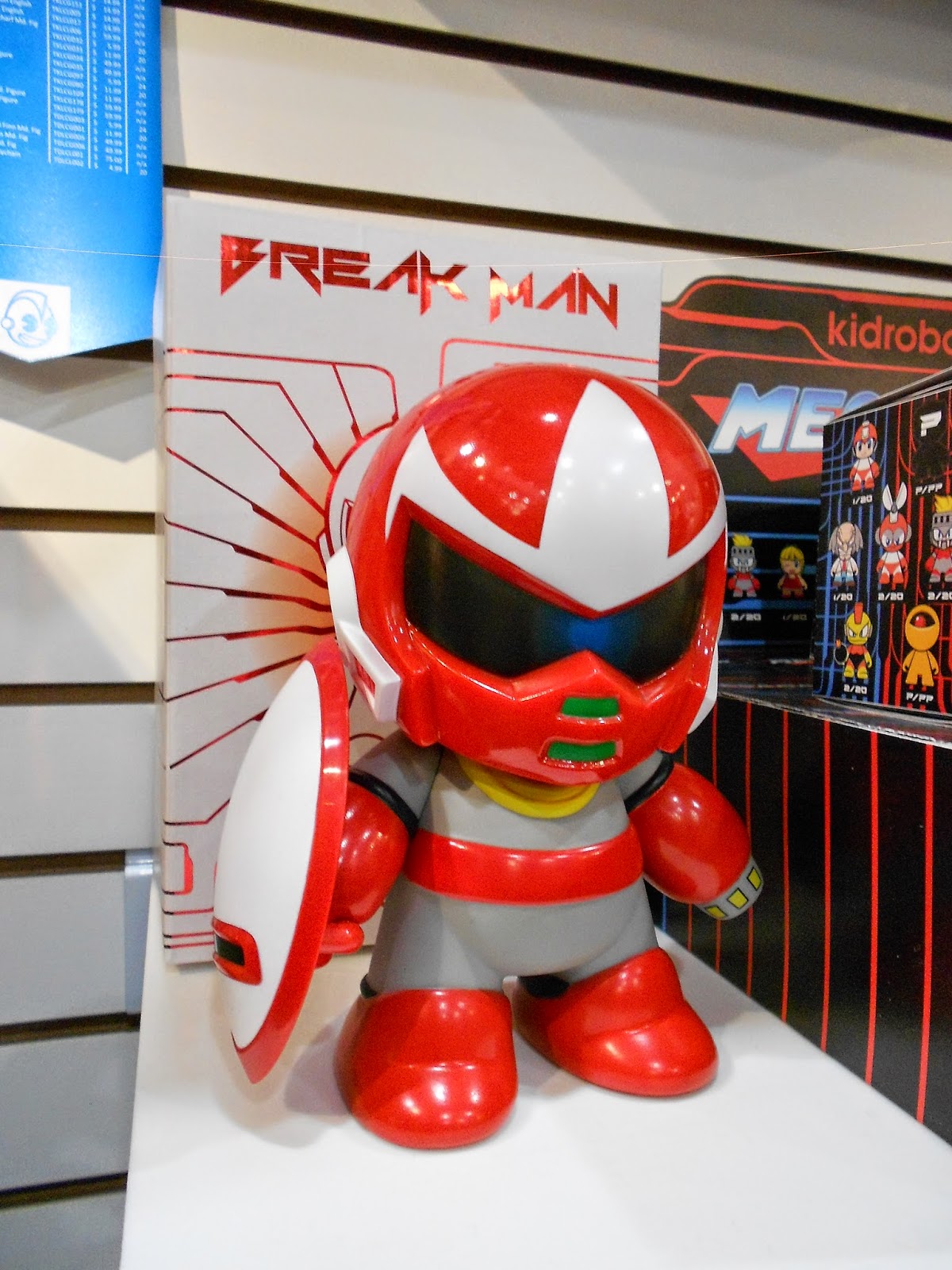 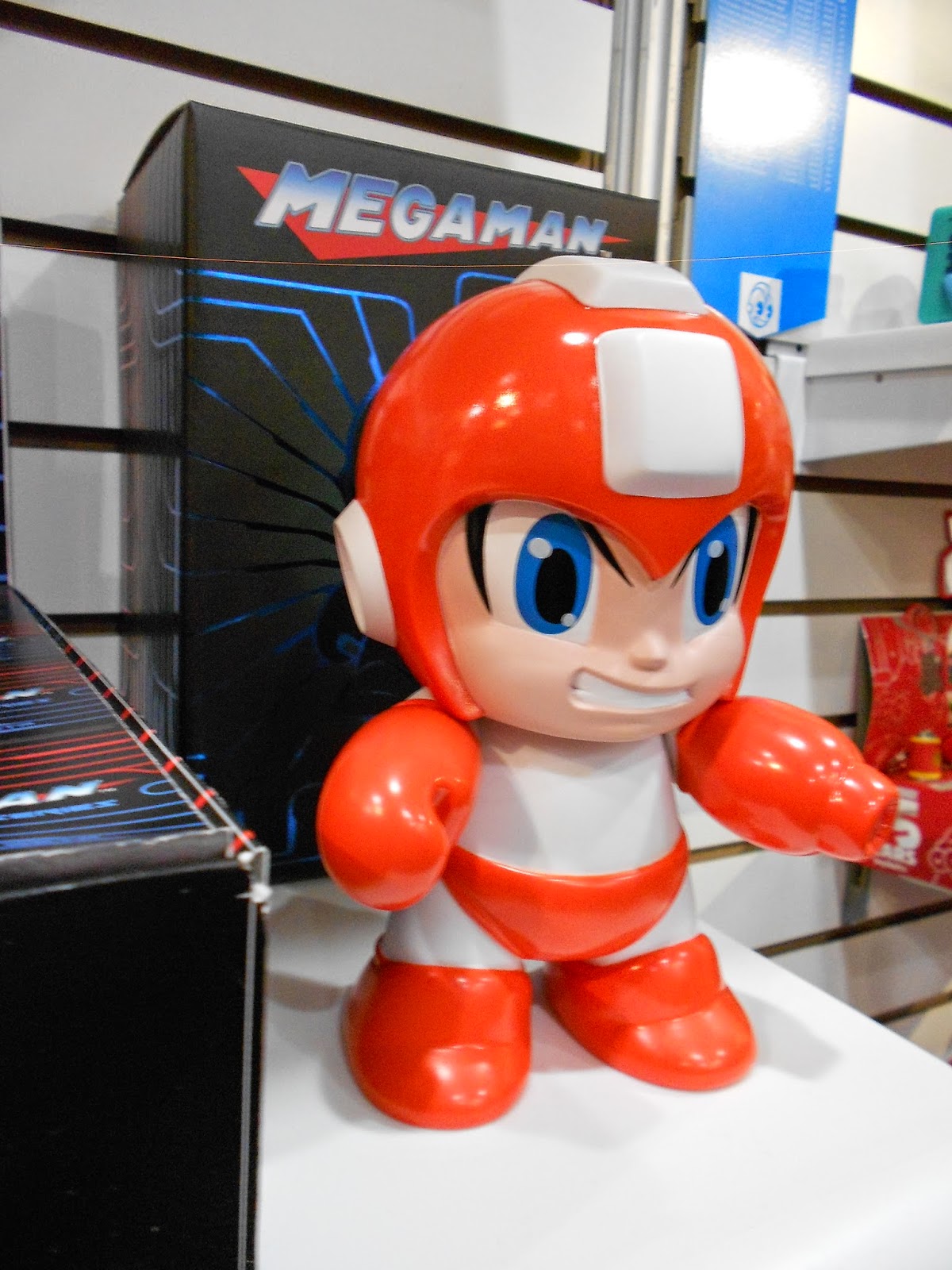 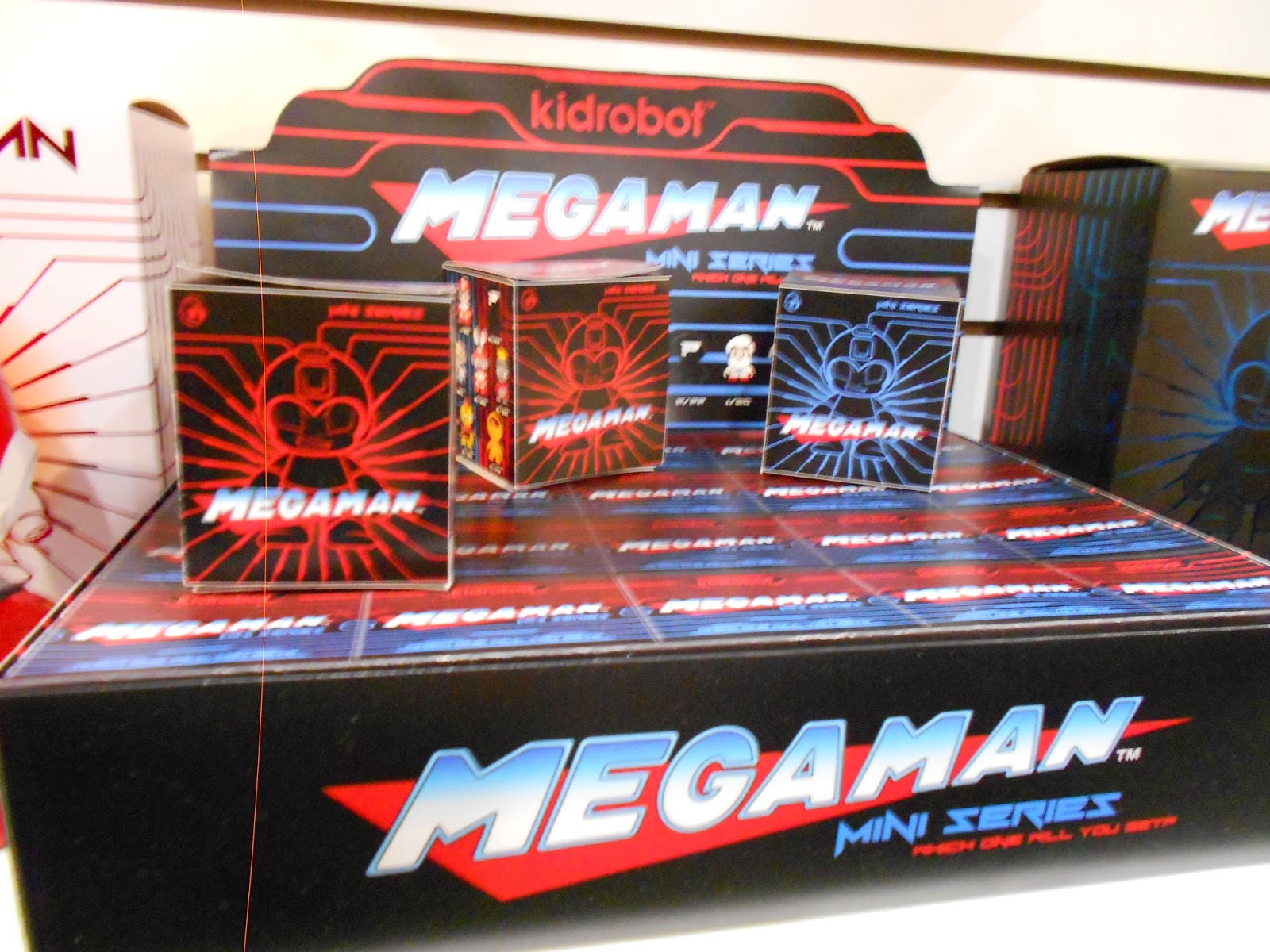 -So is this amazing 8 inch Dunny from Junko Mizuno that I cradled like the baby Jesus: 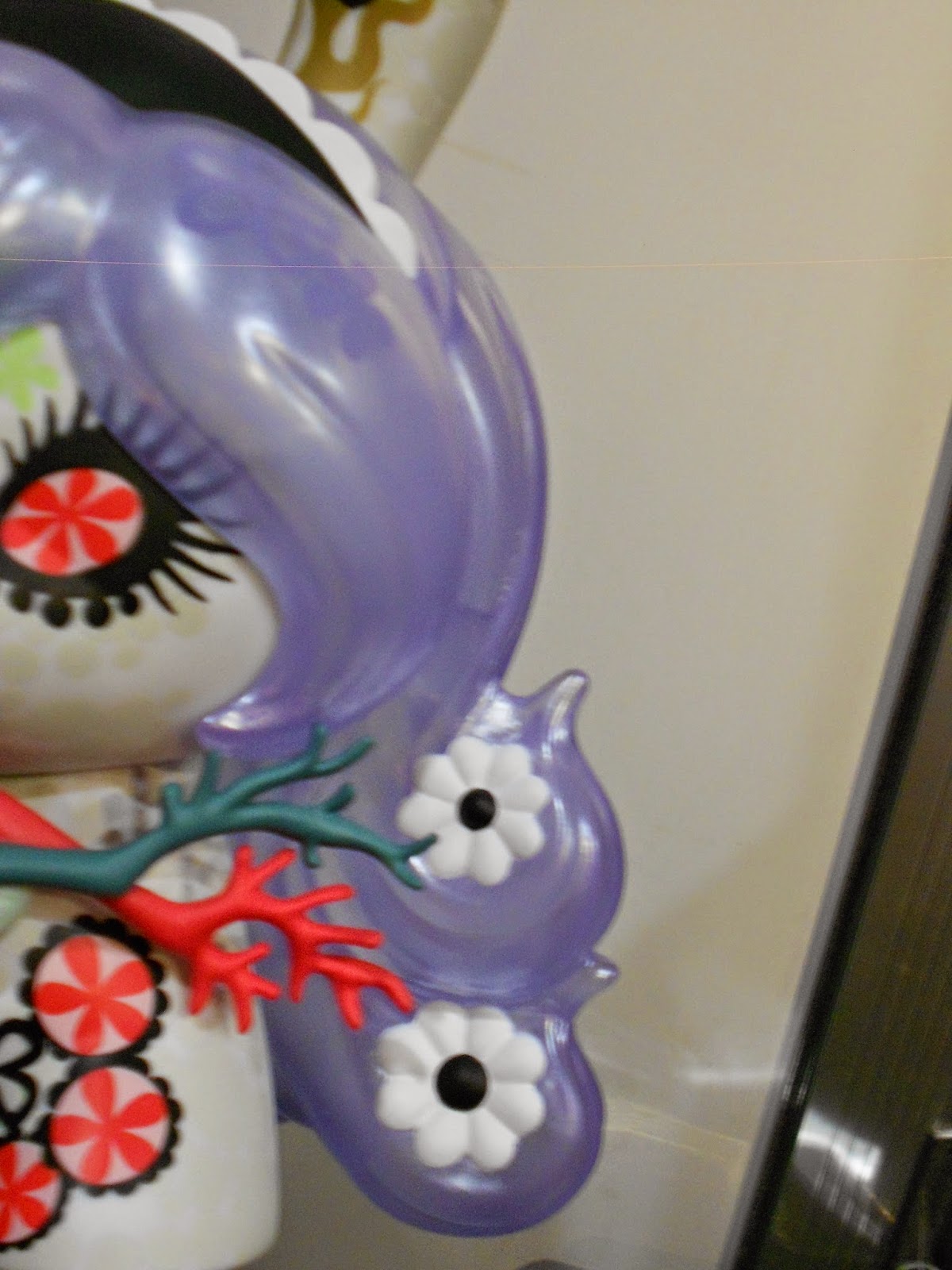 -Expect to see more toys with social and political commentary

- Expanding on the last note, not everything will be as dark as it has been.  Cute is coming back to help balance things out a bit and make us less angry.  I need something to calm me down.

- Frank Kozik is pretty tall and might dunk on you.

I saw waaaaaaaaay more than I was allowed to take pictures of, but I swore a blood oath that I wouldn't go starting rumors and leaking information.  What I can tell you is you won't be disappointed, especially when things kick into high gear in 2016. 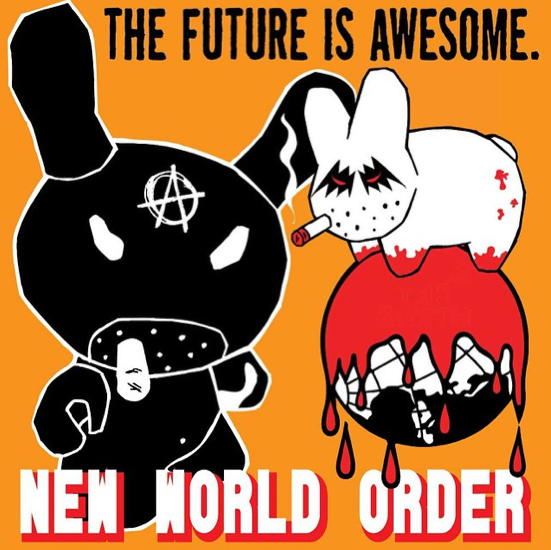 Thankfully people now have something to talk about other than Bill Cosby, how cold it is outside, and whether Obama is responsible for both.  Yesterday it was announced that uber detailed action figure company NECA had purchased Kidrobot for four magic beans and a Ken Griffey Jr. rookie card (kidding, I'm sure it involved more money than I've ever seen) and that Frank Kozik is the new creative director.  What does that mean for us collector folk?  Well, it probably means that our bank statements are gonna make us a little sadder each month because more of our funds will be diverted into buying cool toys that otherwise may not have existed.  While I'm sure it will take some time before the impact is felt in the product (toy making is slow business) you couldn't ask for anyone better to be in such an important position.  Not only does he create, but he collects, and he's been involved in every aspect you can be in the designer toy world.  Plus, he likes cats and you can trust a man that likes cats. N.E.C.A. released what turned out to be one of the biggest hits of San Diego Comic Con in their Jason Voorhees figure modeled after the horrible NES game.  Well less we not forget that A Nightmare on Elm Street had a pretty terrible game of its own.  Now you can get Freddy inspired by how he looked in that slice of video game nostalgia.  And he will be packaged in a reproduction of the original game box.  This will be available at retail locations but will be extremely limited. 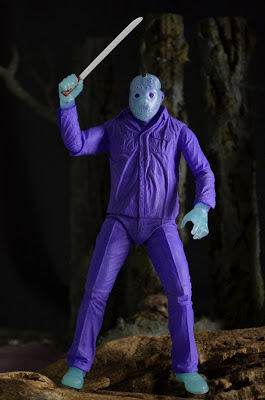 I was so jealous when my neighbor got the Friday the 13th video game for the original Nintendo.  He was a smug little punk, but i wanted to play it so bad because I loved the movies as a kid, so I graciously invited myself over to play it.  My jealousy quickly turned to embarrassment for him, because that gamed sucked so bad.  No matter where you went or what you did, Jason was bound to kill you.  So in a lot of ways it stayed true to the films, but it was frustrating beyond belief.  You enter a cabin: JASON.  You walk along the lake: JASON.  And why was he purple?  Was he going through a weird phase like those little kids you see at the mall wearing a Spider Man costume?

This figure from NECA has to be the only good thing that has ever resulted from this horrible game's existence.  This purple, glow in the dark Jason is an exclusive to San Diego Comic Con and without a doubt the highlight of the show.  They even packaged it in a replica of the original game box, complete with some of the awful graphics.  It's so campy that it is a definite win on every front.  Buy one for yourself at booth # 3145 or beg anyone you know that's going to get you one. 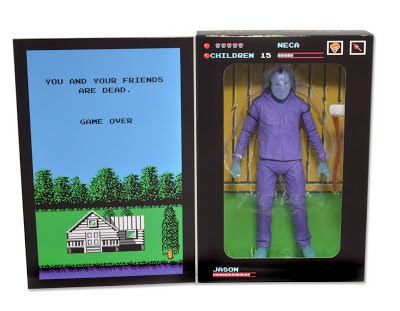