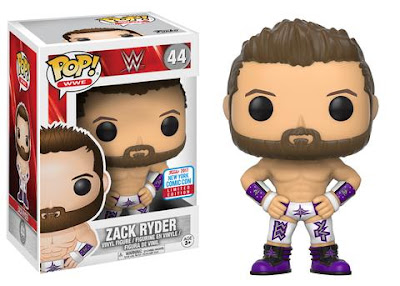 New York Comic Con is right around the corner and you're looking at the best exclusive to be offered the entire weekend.  Professional wrestler, toy collector, and all around Hype Bro Zack Ryder is finally getting the Pop Vinyl treatment.  Is this bigger than his ladder match win for the Intercontinental title at Wrestlemania?  I'm sure it ranks up there, though when he won that match I cried with happiness a little bit inside my body.  It's a skill I've picked up during my many years of extreme manliness.

Funko has a lottery system for anyone attending the convention that you have to enter on line and you can bet I'm gonna try to get one of these.  I'm gonna put him on my desk and he's going to inspire me to keep working hard.  Not verbally of course, unless the one I get happens to be haunted for some weird reason.  Like someone fell into the vat of plastic just as they were making these figures and his soul is trapped in mine.  This just took a dark turn.

Oh, and the Hype Bros deserve to be tag team champions in case anyone is reading this that has the power to make that happen and is easily persuaded by my lack of argument.