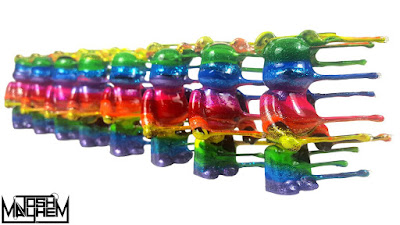 I'm trying to think of a good wind story in the spirit of these Blown Away Bearbricks and I really only have one.  It happened earlier this year when the smoothie place next door to my work decided that gale force winds were in no way a threat to their table umbrellas.  Two of them were zip tied to their holders, while the third was left for Mother Nature to do with as she would.  A strong gust came rolling through and launched it directly into our front window.  The glass held, but the noise scared the hell out of everyone in ear shot.  I went outside and returned it to its table, stunned at the fact that I wasn't going to spend an afternoon boarding up the massive hole it should have left.  No sooner than come back inside than another gust comes underneath the umbrella, opening it completely, and firing it like a North Korean missle straight onto the roof.  We're talking a good twenty feet into the air and gone.  I don't do heights so they were on their own at that point.

Josh Mayhem is revisiting the Bearbrick form with series 2 of these 100% figures.  There are 13 chances here for you to own one of these glittery resin coats masterpieces when they go on sale today (September 21) at 6pm pacific time.  Snag one at www.joshmayhem.com. 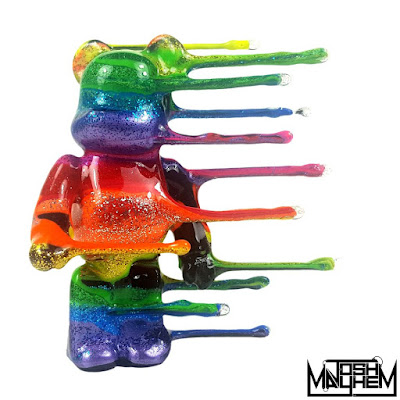