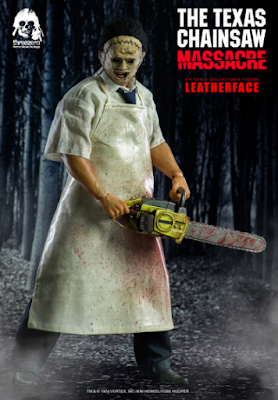 I've been into horror movies since I was a kid and in the spirit of Halloween I've been revisiting a lot of them with my wife.  Many of them are new to her because they were never really her thing, and watching them anew with her has given me a different perspective on a lot of them.  Even though some feature now iconic characters, the films themselves are not always that great.  Some are campy by accident, some on purpose, but as far as an actual scare factor most fall short.  That is, except for The Texas Chainsaw Massacre.  I chalk it up to the way that it was filmed; like some gritty, horrible home movie that no one was ever intended to revisit.  The scenario is realistic enough that it makes you think twice before stopping in any town where the population is advertised as less than five hundred.  I'm beyond not interested in helping a family of cannibals achieve their food pyramid goals.

The film looks real, so it only makes sense that threezero would put their famous attention to detail to work when recreating Leatherface.  Available for preorder now as an eerie 1/6th scale collectible figure, their online store has two versions for you to choose from.  There's the standard edition, which will still make your guests very uncomfortable when they come to visit, and their exclusive web edition which comes with extra accessories. 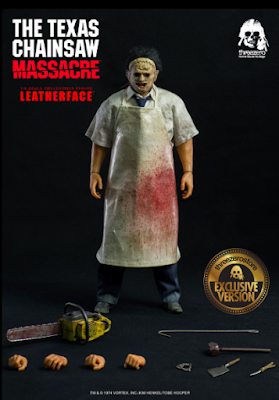