Warrior from the Jade Galaxy from Unbox Industries 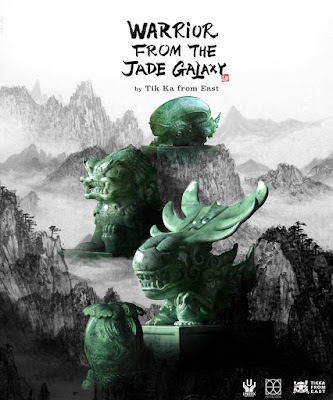 Thirty years from now when some Hollywood studio decides to remake the Alien vs. Predator film, these four figures would be a great jumping off point for the story.  Imagine some Indiana Jones type walking through a night market in Taiwan.  He walks past the stands and people selling their wares, yet he sees none of it.  Something pulls at him with unseen hands, guiding him through the throngs of shoppers.  And then he sees it: a heavily laquered cherry wood box, ornately detailed with gold inlay.  He reaches down and unlatches it, revealing four grotesque jade figures unlike anything he has ever seen.  He picks one up to admire it and the way the moonlight fills it's every detail has left him in a near trance.  It isn't until the stall owner speaks that he is able to break his gaze:

"For a price, I can take you to where I found them."


Then some stuff happens, everyone dies, blah blah blah.  You get the gist. 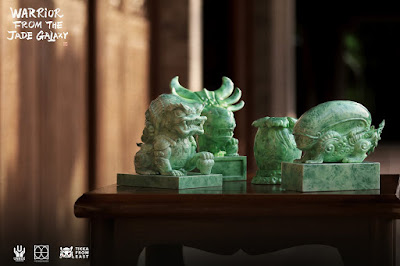 I'm not saying these are the greatest Alien and Predator toys of all time, but they've certainly set the proverbial bar a tad high for anyone after.  Created by artist Tik Ka From East and produced by the wizards at Unbox Industries, each figure is hand painted to look like actual jade.  The effect is so realistic they look closer to the stone that inspired them rather than the vinyl they're made of.  You can preorder them right now at http://store.unboxindustries.info/ for $255 a set.