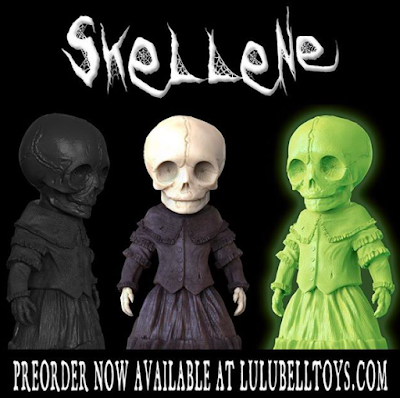 If I can do little more than mildly entertain you and provide you with enough nightmare fuel to get you to Halloween, then I feel my purpose is served.  Those of you with an aversion to dolls will probably be mad at me after this, which is fine because I love this figure.  I'm a sucker for anything Victorian and fetal skulls are just the most precious little things that look like they will sass you in a heart beat.  The latest creation from Miscreation Toys oozes narrative, and while I am not fan of merely cutting and pasting, I feel the story he created to go along with this figure is imperative to the item itself:

During the Victorian era, people often used a physical representation to mark the death of a loved one. These doll-like effigies were created to help the families cope with the deceased, and were typically left at the grave site in remembrance.

From time to time, a little impoverished girl would be seen wandering alone in one of these cemeteries playing with the mourning dolls left at children's graves.  No one knew who she was or from whence she came. One day her visits stopped and eventually her lifeless body was found in the woods nearby. Nobody ever claimed her, and she was buried in an unmarked grave in the cemetery.
Years after her death, tales emerged about a little skeleton girl returning to play with the grave dolls in the middle of the night. Chatter and paranoia about the macabre sightings eventually lead to the girl’s grave being exhumed. However the figure in the small rotted casket was not the girl and instead was one of the mourning dolls she often played with. The girl was named “Skellene” in folklore ever since.

Are you sufficiently creeped out?  It's good, right?  Now for a few more details about our turn of the century misses.  She stands a foot tall, is cast in Japanese soft vinyl, otherwise known as sofubi, and comes in three options that you can preorder right now.  There's the factory painted version, which is limited to 30 pieces, or you can choose a blank one in either green or black.  They are priced at $225 and $185 respectively and can be a wonderful addition to your cabinet of curiosities by checking out www.lulubelltoys.com.