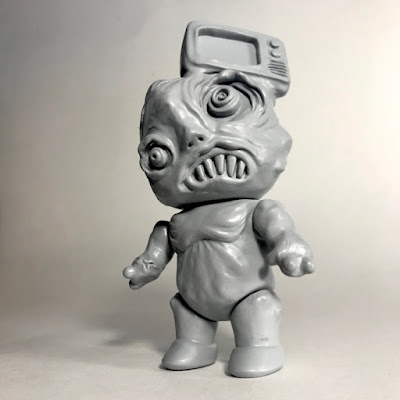 I like when the names of things adequetly describe them.  Take this toy for instance and his name, TV Head.  It is literally a little dude with a television attached to his cranium.  Now the name doesn't imply how he found himself in such a situation, so we are left to guess as to whether the tv is some sort of benign growth or whether it fell from a great height and the injured party decided he liked the way it looked.  When my wife and I first got married we had one of those pre flat screen tvs with the big hump on the back and we bought an entertainment center not taking that into consideration.  I spent the whole day putting it together and quickly realized our mistake, so rather than return my masterpiece of Swedish engineering we bought another tv.  That's the best tv story I got and I apologize for the lack of plot or character development.

Phobia Toys has a Kickstarter campaign that is winding down for this dude and you can still help him become a reality.  They're very close to hitting their goal and there are rewards left that include blank figures and customs from some of your favorite artists.  You can check it out and participate in its creation by visiting https://www.kickstarter.com/projects/thecherv/tv-head.