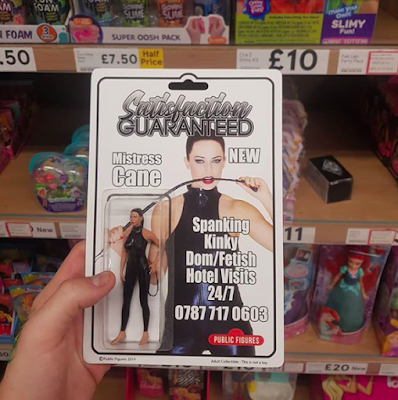 You'd think I'd never been anywhere by the way I'm amazed at certain things.  I could go on for an hour about the two story Target in Brooklyn with the shopping cart escalator and I'm sure I looked really dumb to locals as I refused to move until I saw someone use it.  The gist is the escalator for your cart is right next to the escalator for people, so you can ride along side your future purchases to the next floor.  Magic!!!!!    Now I've never been to Las Vegas, but my wife used to have to go there for her job and one night while we chatted on the phone she told me about these dudes that hang out everywhere passing out calling cards for prostitutes.   When I was little I used to collect baseball cards so I thought it would be hilarious for her to try and collect as many different ones as she could and then I would put them in a binder with plastic protector sheets.  The funniest part was her collecting them, the bonus funny part was having them as a collection.  Needless to say she brought home a bunch and I never actually put the binder together.  I had mostly forgotten they existed until my cat Jorah got into the stack and dragged them all over the house.  He's obsessed with anything credit card shaped and I should have known he'd be all about smacking some prostitution cards across the floor.  I have no idea what my in laws must have thought whenever they watched the cats for us because to this day I still find them and know they must have seen one or two at some point.  It's like my cat knew they were funny and keep randomly placing them out in the open to bare my shame.

Since Thanksgiving will now be twice as awkward this year, what harm could it do to post about figures inspired by those very calling cards?  Public Figures has created a line of four resin figures and slapped em on blown up versions of these vert racy advertisements.  I'm only showing you one, cause believe me the others are not nearly as safe for work as this is, and I know most people read my blog when either on the toilet, on a contraband cell phone in prison, or while they're pretending to do their job.  I'm not trying to have the boss sneak up behind you while looking at such content!

All four of these ladies trying to put themselves through law school will be available beginning on September 1st by visiting publicfigures.co.uk.  And at only £25 each, how could you go wrong?