The Debut of the Toxic Rider Sofubi from Bad Omen Toys 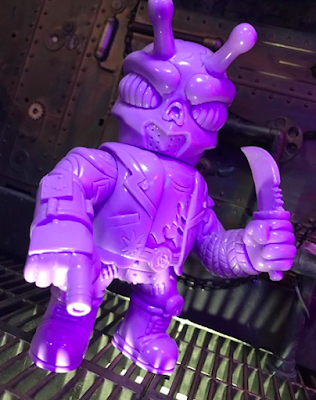 How is it that every summer either ticks or mosquitos are carrying some new horrifying disease that has, until that very moment, gone unnoticed by medical science?  And why on Earth does New Jersey seem to be the Petri dish where these insects tests their new brands of evil out?  Sure, the disease that makes you allergic to red meat started down south, but then guess where it went on holiday and decided to stay?  New...Jersey.  This summer it was the mosquitos turn as they concocted a special brew that was deadly to humans and oddly enough horses.  I,can understand why they hate us because we have entire divisions of local government tasked solely with their extinction, but what did a horse ever do to offend them so badly?  It's not their fault that people who love horses are so dang weird about.  Everyone went to school with a horse girl and knows exactly what I'm talking about.  What with their every sweat shirt having a horses head on it, or the fact that they wear their riding pants to class because their was no time to change.  Horse girls are the worst.

The original the,e behind the post involved bugs and the way they are concocting new evils to try and kill us, but in now way did I see them forming biker gangs and carrying stabbing implements.  This luscious purple hunk of Sofubi is the first ever release of the Toxic Rider figure which also marks the first ever release from Bad Omen Toys.  Designed by the duo of Video Vomit and Ryno Arts, this dude will be making his world premier today, Friday September 6th at 7pm cst.  Own one of these purple dynamos by visiting https://badomentoys.bigcartel.com.