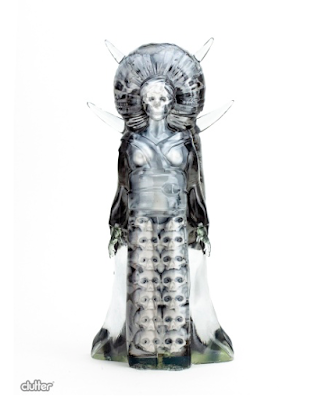 There are but only so many ways in our crazy world to create something truly menacing.  Especially in America, where mass shootings are the norm and where the entire country is run by someone not mentally stable enough to manage a hot dog cart.  Freddy Kreuger wishes he could inspire so many nightmares.  To say I'm a bit jaded is the understatement of the year, but I will readily admit that this figure has a creepy "just found in the tomb of a witch" feel that is slightly unnerving.  Could be that whole skeleton made of random skulls, but that's just a guess.

Tokyo Jesus and Clutter Studios team up again to offer us all a new version of their Oni-Tayu collaboration.  The first edition was filled with blood, so the natural progression for figure number two is to fill it with bone.  This is made from double cast resin and features and entirely new sculpted structure beneath the clear shell.  She stands at 12 inches tall, is limited to only 50 pieces worldwide, is filled with the angry ghost of a fisherman's daughter (not really, but maybe) and will be available for preorder starting on the more than appropriate Friday the 13th.  Each one is $350 and will start shipping out at the end of November.  Oh, and the skeleton glows with an otherworldly energy that I cannot confirm is not a poltergeist.  Imagine the fun you'll have! 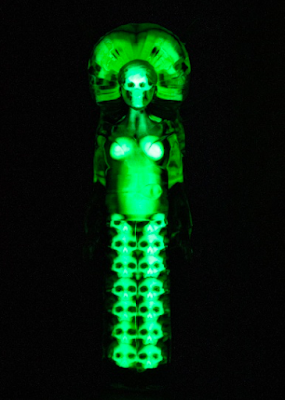