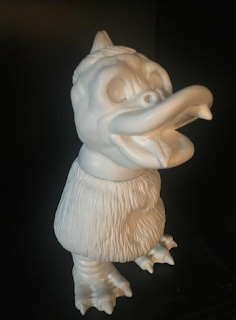 In the great state of New Jersey we have an over abundance of the majestic bird known as the Canada Goose.  They're really pretty birds but they have two qualities that are less than desirable.  For one, they love to walk across the street in droves.  One of them starts off, followed by a seemingly endless line of their relatives in tow, bringing traffic to a halt.  I don't mind waiting for them to waddle their way across the street and I will in fact block other cars from trying to drive around then until they all make it safely.  What makes me insane is that they can fly but insist on walking like confused tourists.  And it drives me insane because I don't want to see them get hurt by someone who isn't paying attention.

The other thing about them that is less than ideal is the fact that they drop trucker sized turds everywhere they go.  They're these green tinted monsters that pepper the landscape like buckshot and are nearly impossible to navigate between without adding some stank to your shoes.  Thankfully, their uncontrollable bowel movements seem to be limited to when they are walking and eating because if they dropped those bombs on you from above it might knock you cross eyed.

Geese are not in fact ducks, but the only duck stories I have for you involve my love of those tiny baby ducklings and you've already heard that a few times.  So to celebrate the release of the latest figure from Grody Shogun and Lulubell Toys I had to do a bit of substitution.  This is Protoduck, who has taken a strange detour on the evolutionary highway that has equipped him with a lone vampire fang and a horn that juts out from his head.  Sounds like a couple of people I know.

This dude stands 6 inches tall and is available for preorder now for an intro-duck-tory price of just $30.  That is, until 50 orders are placed at which time the price will go up slightly to its normal $40.  Where else are you getting that much genuine Japanese sofubi for that price?  Only from https://www.lulubelltoys.com/.