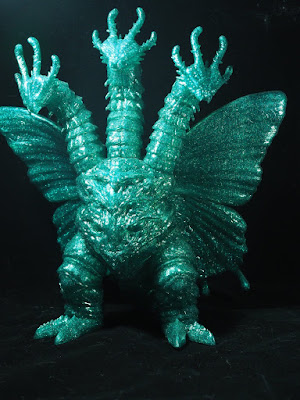 The new Godzilla film just showed up as a rental option through our cable provider and I was beyond excited to watch it.  I eagerly paid the $5.99 and sat with baited breath for each great monster to be revealed on screen.  Those were two hours of my life I will never get back.  The previous movie wasn't bad, but this one was hell bent from the beginning to make me hate it.  The dialogue was clunkier than my first car and the monsters were mostly hidden behind fast paced CG that really made me miss the simplistic yet much more effective costumes of films past.  How can they make a modern film like Shin Godzilla, which has one of my favorite monster designs ever, and have flawless visuals and intriguing story telling (don't act like you weren't fascinated to learn about Japanese government) but once Americans get involved everything gets blurry on the screen and in the script?

I'm all about this gigantic figure from Planet Asia because it is like the glittery love child of Mothra and King Ghidorah.  And look at that green sparkle that doesn't need a drop of paint to accentuate it.  This beast stands 15 inches tall and features 11 points of articulation, which is about three more than me at this current moment.  At $180 plus shipping I'm surprised these are still available.   Is the problem that you need to make some space in your house?  That's not a problem at all, just throw out some furniture you don't like, or throw out some furniture you do like, life is too short to be worrying this much about a silly thing like that chair your mom gave you.