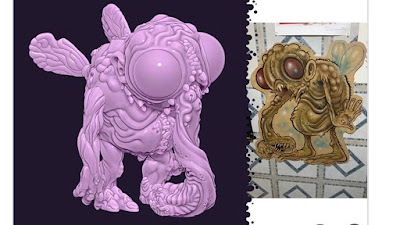 When you've tired yourself out watching pimple popping videos and cyst removal the next logical progression is watching a bot fly get yanked from someone's festering skin.  It really has everything you could ever want:   There's the horror that the person is raising an insect baby in their flesh and they are really not exited about being a parent.  And there's a second person who is going to do the removal and whose excitement level is directly proportionate to their lack of medical training.  And let us not forget the botfly larva itself, whose tiny little black spines are hell bent on staying knuckle deep in their seemingly endless food source.  Armed with little more than a pair of tweezers and a cell phone camera the magic is beyond anything Kubrick could have dreamed up.


When a man is known as Evil Dave, you can bet he's not dreaming up unicorns and rainbows.  Enter Death Goldblum the Gore Fly, whose appearance is absolutely as advertised.  He's buzzing around on Kickstarter now in the hopes of becoming a vinyl toy, but he needs your help to make that dream a reality.  Check out the link here, snag some rewards, and bring this turd eating insect to life.