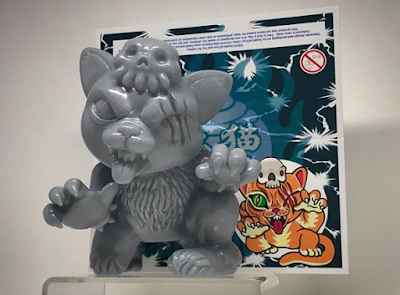 Do you remember the movie Clash of the Titans?  I'm talking of course about the original, not the crappy remake one from a few years back.  It's one of my all time favorites and other than the three original Star Wars films, the only one I'd watch repeatedly without getting tired of it.  Recently I was discussing cats with someone and they asked how I ended up with five of them and the best way I could think to describe is was the way the Gods presented Perseus with the various weapons in the film to complete his task.  Everything was placed strategically so he couldn't help but find what was intended for him and I feel the same way about the little critters that wake me up at 6:30 every morning demanding to be fed.  They were intended to enter our lives at that exact moment and all we had to do was scoop them up and take them in the house.  Ok, so we managed to do that with one of them, the others didn't make it that easy, but you get my point.  Especially the one who wedged himself behind the car engine and required four hours and a tow truck to lift the front of the car to get him out.  It would have been easier to fight the Kraken.

Deathcat Toys and Toy Art Gallery are set to release another of the former's mascot figures in silver sparkly sofubi.  He stands at four and a half inches tall, looks meaner than a snake, and will be available starting today at 3pm eastern time for $45 each.  That's way less than we spend on any of the three prescription foods that we feed our little buddies, who decided its way more fun to have individual dietary needs than to come together and share the same one.