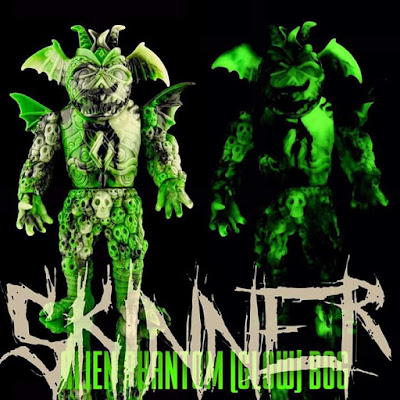 The biggest let down of this year has got to be the Storm Area 51 event that resulted in absolutely no one seeing those aliens.  Now as someone who values my freedom/life there was no way I was gonna show up to help, but you can't tell me there aren't a ton of Internet dudes hopped up on energy drinks and other questionable substances that could have made it happen.  Hell, half the state of Florida makes the news for much crazier reasons than this, so I was sure something exciting was gonna happen.  But apparently no one wants to see me happy, which seems to be a running theme.  Stop being so selfish!


If it's any consolation I'm sure the aliens are nowhere near as awesome as Ultrus Bog.  They are probably all sickly and wouldn't even understand any of the memes you'd want to show them. Skinner's  Ultrus Bog gets all the current meme references and looks forward to seeing all the ones you text him while at work.  He looks awesome in the crazy marbled vinyl pour from Lulubell Toys and tons of people are gonna want to bring him home.  Only 30 pieces were created with the Alien Phantom color scheme and they are up for grabs begining Wednesday, October 30th at 6pm pacific time.  He retails for $125 each plus shipping and can only be had at www.lulubelltoys.com.