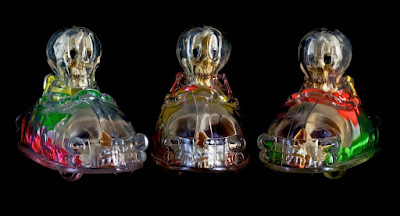 A few days ago my wife and I had a layover in San Francisco and spent the day exploring the city.  After nearly dying from climbing the steps up Telegraph Hill, my aging joints informed me that any further travels would be done via ride share.  We used the service four different times as we dashed around the city like we were Steve McQueen and of the four drivers I am reasonably sure that at least three of them were not the Zodiac Killer.  The first guy was fairly quiet, uttering only the basic of pleasantries and keeping any other small talk to a minimum.  The second driver had worked as a corporate executive before his current profession, but lest you feel sorry for him the way we did, he was just trying to make quick money for the downpayment on a second yacht for his grandchildren that he found a really good deal on.  I'll never understand rich people.  The third driver was like being on carpool karaoke with James Corden except instead of singing he told us how he has worked extensively on trying to communicate with jelly fish and he thinks he may have actually succeeded.  He also did not have a British accent or resemble James Corden.  The fourth one is my lead suspect in the Zodiac case as the only question he asked us was what languages we spoke and the proceeded to go the rest of the ride without speaking.  There could have been any number of reasons for this, such as maybe he wanted to date a nice Icelandic girl and was having trouble understanding what she liked to eat.  Or maybe he wanted to join a Spanish gang and wanted to practice all of the catchphrases he would need for success in that field.  My take on it was that if we didn't speak English we wouldn't be able to call the police to make them stop him from murdering us.  I'm gonna have to wrap this up so I can speak with the authorities.

No one does customs like Plaseebo and he has taken Vincent Scala's Skull Racer figure and turned them into the ride share from hell.  He filled em with all kinds of interesting stuff, made em light up, and now they're ready to drive right into your nightmares.  There are three different versions and can only be purchased via lottery, which just so happens to close on Halloween (that's tomorrow).  Here's what you gotta do to own one:

To enter lottery, please send the following to:   bob@plaseebo.net

Lottery winners will receive notification emails by Friday November 1st. Figures will ship from the USA upon receipt of payment due by Monday November 4th. 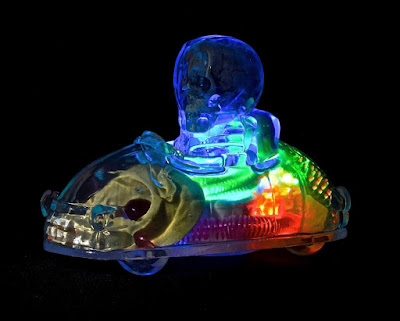