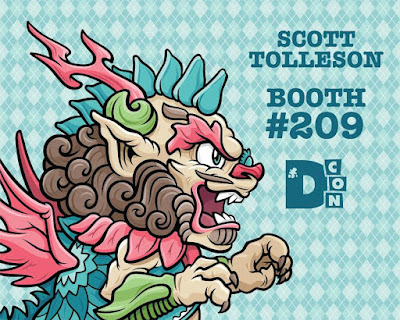 When Scott Tolleson isn't curating the best "Jeffrey Epstein Didn't Kill Himself" memes on Facebook, his like, fifth favorite thing to do is design toys.  He'll have a bunch of releases for this year's DesignerCon including some old favorites and some brand new figures that are sure to become your favorites the moment you lay eyes on them, which is about to happen right now. 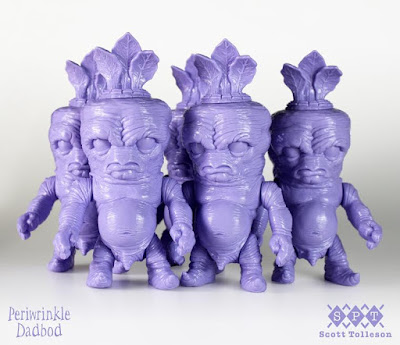 Is it technically still a dad bod if you don't have kids?  Of course I'm asking for a friend, as I am the epitome of peak performance.  I'm not here to shame you though, even if you are a sentient root vegetable with resting New Jersey face (it's like resting bitch face, except it let's everyone around you know that you're ready to throw hands at all times, bro).  Being that they are Deadbeets, their dad bod's could be the result of the various bacteria in their guts that are fighting a losing battle in trying to breakdown their formerly living tissue, thus turning their bellies and into a volatile gas bomb.  Isn't nature beautiful? 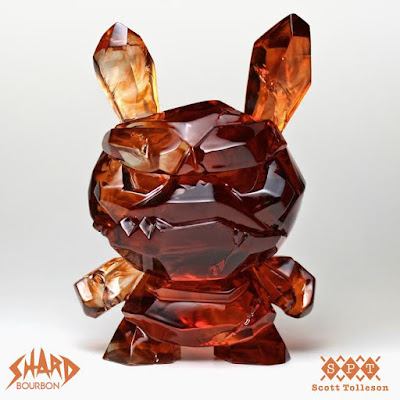 Oooooooh this is so pretty.  Cast in clear Bourbon tinted resin, this five inch Shard Dunny is sure to be one of the big hits of the show.  Did you see that a whiskey company made little shots of liquor that look like Tide pods?  That's sure an interesting way to reach a customer base that is obviously brain dead already, but you have to leave no stone unturned if you want to grow your business I guess.  I love this figure and the variations in color they were able to achieve and the effect is probably even cooler after you've downed a couple of those sweet bourbon laundry pods. 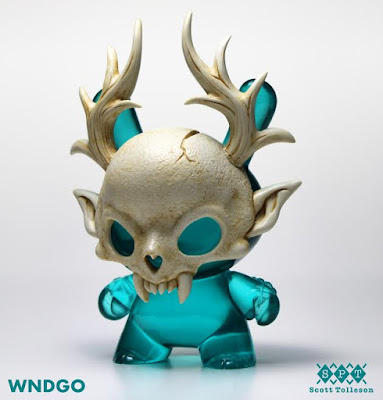 Let's keep the good resin vibes going with a figure you may recognize that has gotten a size upgrade.  WNDGO has gotten the five inch upgrade as well, with a clear blue body and a bone-like mask that I suspect will make him equally as popular as his brother listed above.  It's a striking combination that is equal parts cute and nightmarishly freaky.  If you wake up one night and he's chewing on your toes in a non alluring way don't act like I didn't see that coming. 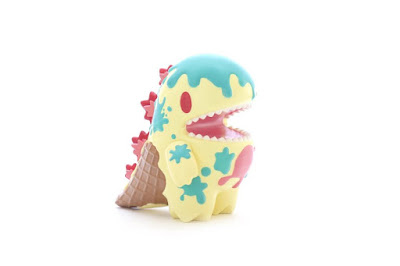 Well this is certainly different from what we've seen before.  Just a little ice cream dinosaur bro, his mouth agape as he utters the word "Mama" in a squeaky little voice that would instantly make your heart melt.  Speaking of melt, if all of the dinosaurs were actually made of ice cream that would totally explain how they all went extinct.  They ignored all the signs of global warming and in doing so turned into lactose filled puddles.  He's not asking for his mother, no he is screaming that their hubris has doomed them all.   This figure is a collaboration with Unbox Industries and Ziqi, who are probably horrified about what I've just written. 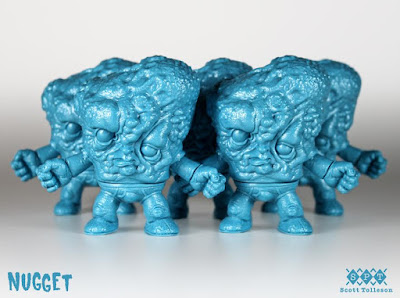 I've done some damage to chicken nuggets in my lifetime and it looks like my day of reckoning is close at hand.  Look, I can't help that they are the most deliciously perfect food on Earth and that my body still craves them even as an adult.  Especially when they're crispy on the outside and warm and filled with otherwise unusable chicken bits on the inside.  You think that whole "pink slime" expose deterred me in any fashion from devouring them by the handful?  I can assure you it did not.  But what if every chicken nugget I ever ate turned into one of these, formed an army, and sought their revenge?  I better get my affairs in order.

All of the goodness you see here and much more will be available by visiting Scott at booth # 209.