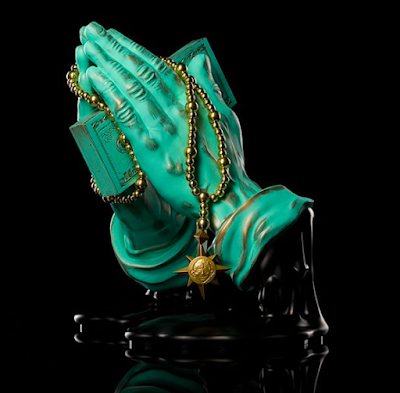 If the United States government was held to the same truth standards as any consumer product advertised on television, this would rise ten stories tall in New York Harbor, beckoning the rich, evangelical, and the gullible to their promised land.  I have no problem with religion or God and in fact I wholly believe that he cringes just as much as I do with each broadcast of the evening news.  But I find myself more and more mentally trudging though life, bogged down in the endless swamp that is Kanye West, and televangelists, and politicians vomiting their rhetoric all over the internet knowing that so many will sop it up with ultra absorbent dollar bills and miss informed ballots.  I guess I can't really find anything funny to say about this vinyl sculpture from Frank Kozik, but I don't feel the sentiment that it invokes is really conducive to my normal shtick.  It kinda makes me mad because I feel that it is sniper-accurate in it's portrayal of what's wrong with America right now; a plastic representation of how I feel any time someone dares equate our Idiot in Chief with divine provenance.  Surely if his coming is anything Biblical it is most certainly written about in the book of Revelations.   So yeah, I'm gonna tell you that its manufactured by Kidrobot and I'm gonna tell you that it comes in two different versions that both will be available on Friday, December 6th at 10 mst.  But I'm not telling you because it inspired me to retell a story about how my favorite picture of me as a kid involves one arm around a goat and the other holding a can of Pepsi as I grinned like an All American paid spokesperson.  I'm writing about this because you can look at it as just another toy that will remind you how bad you are at dusting your house every few months, or you can look at it as scathing protest art that would look equally as good plastered on brick walls faster than the secret police could have them removed.


www.kidrobot.com
Posted by Chris at 3:58 PM